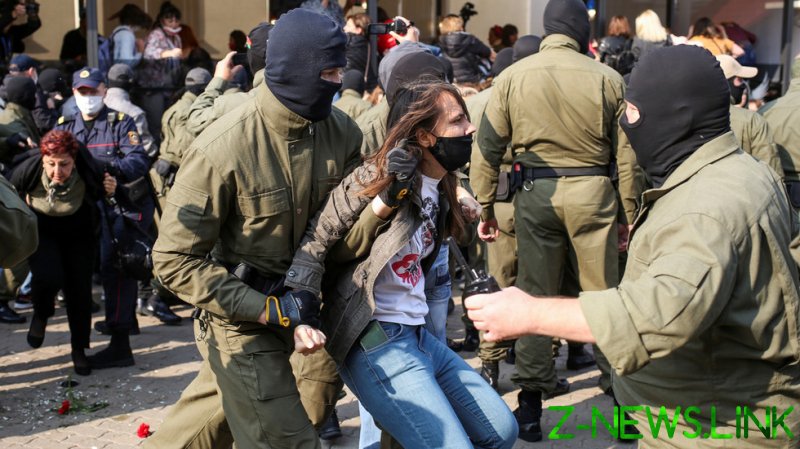 The protest began peacefully at Svoboda (Freedom) Square on Saturday afternoon, RT’s Murad Gazdiev reported from the scene, noting the “festive” atmosphere there. The square houses the rebuilt historic town hall of Minsk, which is now a museum.

The protesters locked arms to form “human chains” and chanted “shame” at the police. Some scuffled with the troops and tried to remove balaclavas from their heads. Photos and videos from the scene showed the officers grabbing some of the women by the hair and bundling them into prison vans.

When the first van with detainees attempted to leave the square, protesters blocked it, and it took several minutes to clear the way. The police confirmed that arrests were made, saying the exact number of arrestees would be announced later.

After the gathering at the square was broken up, the march continued in other parts of the city. The protesters started out from several points and chose “unpredictable” routes to make it harder for the police to track them down, Gazdiev reported. They eventually formed a large column of several thousand people, which marched through central Minsk before dispersing peacefully.

Belarus has been gripped by protests since the contested election of August 9, in which the long-time president, Alexander Lukashenko, claimed a landslide win with 80 percent. Opposition candidate Svetlana Tikhanovskaya, who is now in Lithuania, insists she gained more votes and that the election was rigged.

Tikhanovskaya’s call for new “free and fair” elections has been backed by thousands of Belarusians, who have been taking to the streets for weeks. The police have responded with mass arrests, detaining 6,700 people in the first few days alone. They have been accused of using excessive force and mistreating the detained protesters. Three demonstrators have died, and hundreds of people have been injured in the violence, including police officers. Lukashenko said he would not bow down to the opposition’s demands and has blamed outside meddlers from countries such as Poland and Lithuania for inciting the protests.