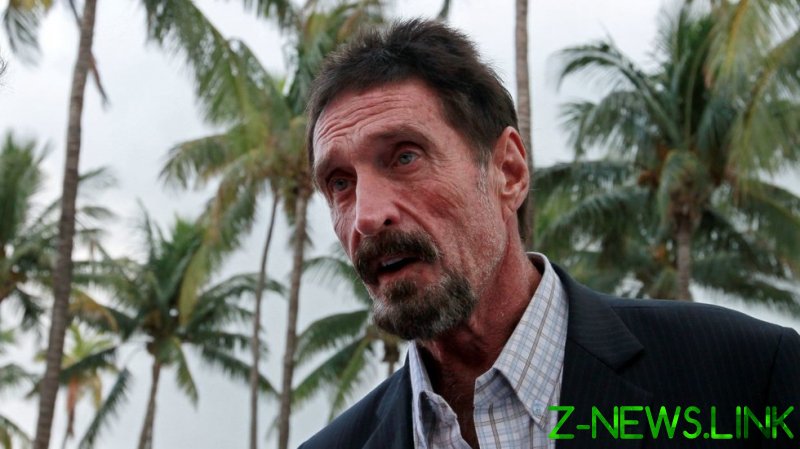 As the law finally caught up with anti-virus software pioneer John McAfee, I had to wonder if that meant an end to the outlandish escapades of this paranoid pirate who, for several years, was one of my closest neighbours.

Born the son of a US serviceman and British mother in the Forest of Dean in the UK, McAfee, whose eponymous app still comes packaged alongside the operating system on most PCs running Windows software, bought a house just a couple of hundred metres up the beach from where I lived at the start of the millennium on an island off the coast of Belize in Central America.

While his estimated fortune was once put at $100million, his modest purchase was a collection of small, neat bungalows linked by covered walkways right on the beach. The place was empty at the time because the former owners had perished at sea during 2000’s Hurricane Keith.

The husband and wife had attempted to rescue a catamaran they owned by sailing out beyond the Mesoamerican Reef, the second largest coral reef in the world, just a few hundred metres from the beach, in a bid to avoid the worst of the weather during the storm.

Both their bodies and the catamaran washed ashore just a couple days later. The wrecked cat was left outside the house for a couple of years as a grim reminder of their foolhardiness, until McAfee bought the place and cleared the debris away.

But not all was right in paradise for the newest resident on our island.

By its very nature, this remote destination attracts more than its fair share of people not wanting to be found. Heavy drinking and trying to convince passing tourists to invest in their latest business scams are the favourite pastimes of many of the locals, whose ranks draw primarily from a steady flow of US expatriates looking for somewhere to live where no one asks too many questions.

My own next door neighbour was a retired builder from Texas who would start his drinking day well before noon. When he was found shot dead with his own .38 gun in his hand, it was attributed to suicide, but rumours of shady loans and business deals gone sour featured heavily in island gossip at the time.

As part of a key route between Colombia and Mexico, Belize has long been a drop-off point for cocaine traffickers. Fast boats packed with cocaine and tanks of fuel would take a non-stop three-day trip from Colombia to the isolated and deserted beaches and cayes off the Belizean mainland, from where the drugs would be collected to continue their journey while the boats they arrived in were simply abandoned or sunk.

Sometimes an enterprising local would find the drugs before the traffickers, either in a boat or washed ashore, and would sell them on to a local connection. It was called winning the white lottery.

So it was this semi-lawless community of scamsters, island dogs, resort owners, tourists and US retirees that McAfee joined. And it was there he took up with some decidedly dodgy companions. A harem of young local women kept him company, while a gang of unapproachable young men, wearing shades and carrying assault rifles, ‘patrolled’ his stretch of beach and roared up and down the coast in his boat.

It certainly kept his neighbours on edge.

His immediate neighbour Greg Faull owned a pair of dogs whose persistent barking led to some dispute with McAfee, and when the animals were found poisoned and Faull dead with a gunshot wound to the head in 2012, the police went looking for John.

After searching the property to no avail – McAfee was hiding in a hole he’d dug in the sand with a cardboard box over his head – the police left and McAfee fled to neighbouring Guatemala, blogging along the way and giving interviews to the world’s press which he used to taunt the Belizean authorities and extoll his own genius at evading capture.

It was comic stuff, and would have been funny if not for the fact that a man was dead.

With no extradition treaty in place between Belize and Guatemala, McAfee was able to find his way back to the States in 2013 and since then he’s travelled the world, built a cult-like following on social media with a million fans on Twitter and tried his hand at promoting cryptocurrencies, taking on consulting work and undertaking speaking engagements. He also sold the rights to the story of his life, which appeared on Netflix as ‘Gringo: The Dangerous Life of John McAfee’.

It hasn’t been trouble-free, of course, and in 2018, a Florida court found McAfee “liable” for Greg Faull’s death in 2018 and ordered him to pay the dead man’s family $25 million. Last year he and five associates were arrested in the Dominican Republic on suspicion of travelling on a yacht carrying high-calibre weapons, ammunition and military-style gear.

All the time, McAfee tweets and boasts of his run-ins with authority, egged on by his followers who buy the mixture of fun and fantasy that are now the stock in trade of the 75-year-old former NASA employee.

Recently he paid tribute to one man he credited as being one of his army of body doubles, used to keep the authorities off his scent, like some international man of mystery playing an eternal game of ‘catch me if you can’. Now that game has finished at the appropriately named El Prat airport in Barcelona, with the simple matter of failing to file a tax return appearing to be this real-life rogue’s final undoing.

While life is colourful with John McAfee on the block, sometimes people drawn into his orbit are seriously hurt, or as Greg Faull found, paying with their lives after a falling out with the computer engineer. But this arrest could signal the end of a wild career. After all, it was the taxman who put a stop to Al Capone. Maybe now, he’ll do the same to John McAfee.