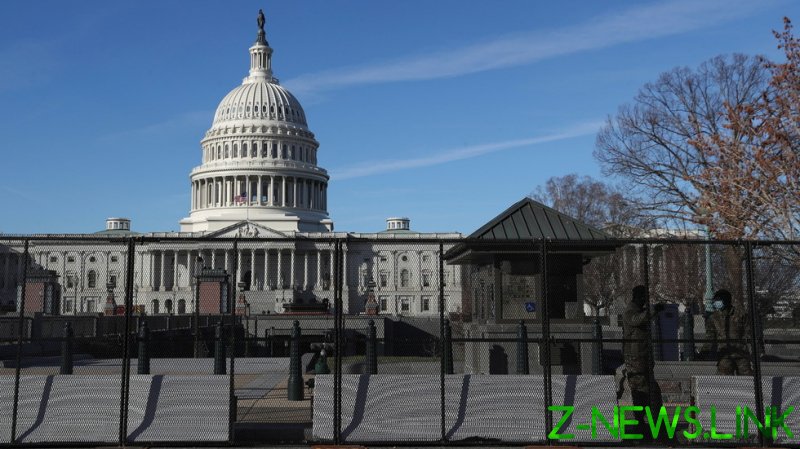 US Representative Jason Crow (D-Colorado) said he was updated on the status of riot-related prosecutions by Army Secretary Ryan McCarthy. Rifles, Molotov cocktails, explosives and zip-tie handcuffs were recovered during the arrests, suggesting that “a greater disaster was narrowly averted,” Crow said.

The Army is aware of additional domestic terrorism threats in the days leading to Biden’s January 20 inauguration and is coordinating with local and federal law enforcement agencies on security preparations, Crow said. The congressman added that he’s afraid members of the military may be involved in insurrection and he asked McCarthy to review deployments for the inauguration to ensure there are no troops “sympathetic to domestic terrorists.”

Eric Gavelek Munchel, 30, was among those arrested and charged on Sunday. He was suspected of being the man shown in social-media video footage in the Senate press gallery with zip-tie handcuffs and a weapon, according to a Department of Justice statement. He was booked into the Nashville jail on Sunday afternoon and faces one count of knowingly entering restricted property without lawful authority and one count of violent entry and disorderly conduct on Capitol grounds.

Larry Rendell Brock of Texas also was arrested Sunday on the same charges. Prosecutors said he was identified as wearing a green helmet and tactical vest with patches. He was allegedly holding white flex cuffs, which like zip-ties, can be used to restrain or detain a person.

Supporters of President Donald Trump traveled to Washington last week to protest Congressional certification of Biden’s electoral victory on Wednesday. Democrats have blamed Trump, who alleged that the election was stolen from him through massive fraud, for inciting the Capitol assault.

The Capitol break did bring about a wall – just not the one Trump was trying to build on the nation’s southern border. McCarthy announced Thursday that a non-scalable fence would be erected around the Capitol and would be left up for at least 30 days.