Armenians must be prepared to defend ‘motherland,’ says PM 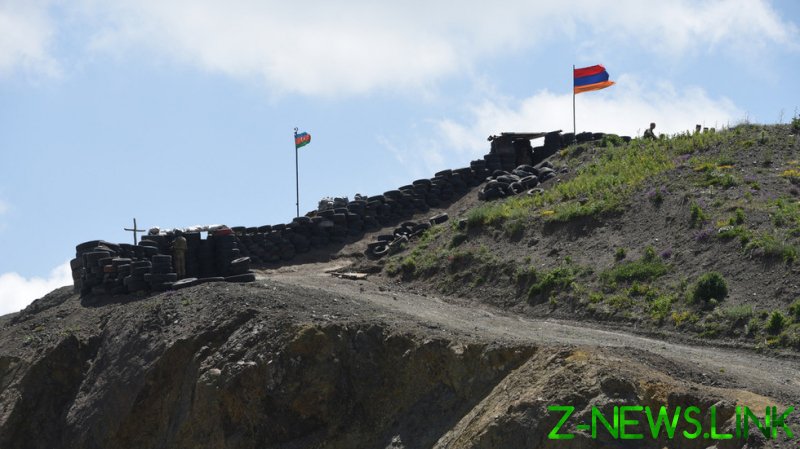 Nikol Pashinyan made the call on his compatriots to rally together and protect their “holy homeland” on Tuesday, after clashes broke out on the shared frontier.

According to a message from the Armenian Defense Ministry, “the situation in the eastern direction of the border zone continues to be extremely tense. There are local battles, during which the enemy uses artillery, armored vehicles and various types of small arms.” The Armenian side has said several of its soldiers have been wounded and two combat posts have been lost in the fighting.

Both former Soviet republics have pointed the finger at each other for the latest provocations. Yerevan’s Defense Ministry accused Azerbaijan of attacking Armenian positions along the border. Meanwhile, Baku has claimed that it acted in self defense, with its forces swooping in to destroy anti-tank weapons and mortars.

Yerevan’s security council spokesman Armen Grigoryan reached out to Moscow for help amid the skirmishes, saying that “since the attack was on the sovereign territory of Armenia, we ask Russia to protect the territorial integrity of Armenia within the framework of the 1997 treaty.”

This is not the first time Pashinyan has sounded the alarm with accusations that the Azeri army had crossed the state border. In May, the prime minister alleged that Baku’s forces had gone “three and a half kilometers inland” and accused undercover operatives of “trying to surround Lake Selvich,” which stretches across both sides of the frontier between the two nations.

Relations between Baku and Yerevan have hit rock bottom over the past year, with a short and bloody war in the disputed province of Nagorno-Karabakh. Last autumn saw Azerbaijan and Armenia strike a Moscow-brokered deal to end the current conflict over the territory, with Russian President Vladimir Putin confirming the agreement had been reached and that peacekeepers would be deployed to the region.

Nagorno-Karabakh is an enclave recognized as a de jure part of Azerbaijan, but administered by the ethnic Armenian majority. An armistice signed in 1994 froze the conflict over the territory not long after the fall of the USSR, but fighting resumed in a short and brutal campaign in which Azerbaijan took control over swathes of territory.