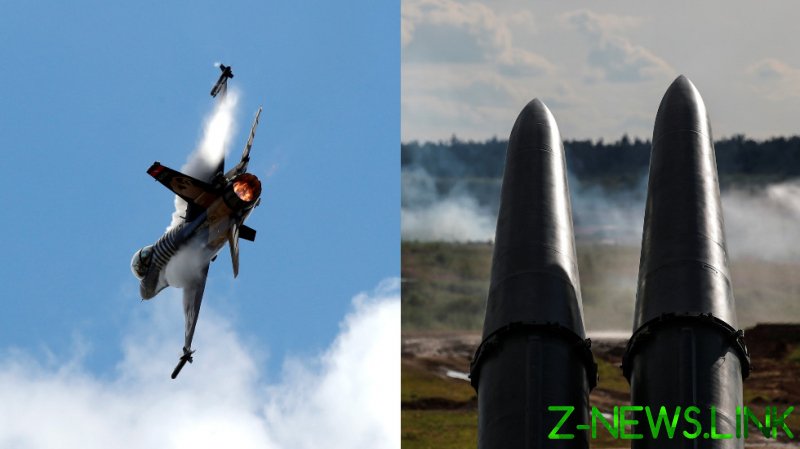 However, Yerevan, while calling the F-16s a “Sword of Damocles” hanging over the people of the disputed enclave, said it hopes the situation won’t escalate to that extent.

The Armenian ambassador to Russia Vardan Toganyan said on Monday that “all measures, including the Islanders,” were on the table if Ankara deployed the jets.

However, he added, the time for that has not come yet. According to Toganyan, air defense systems in the area are enough to deal with Turkish and Azeri drones that have been used so far.

The 9K720 Iskander (SS-26 Stone in NATO nomenclature) is a mobile, short-range ballistic missile system of Russian design, in service with the Armenian military. Yereven has said it was open to deploying the Iskanders, as well as Su-25 ground attack jets, if it became necessary to match Azerbaijan’s escalation in the ongoing conflict over the disputed region.

Armenian Defense Ministry spokesperson Artsrun Hovhannisyan said during a Monday press briefing that Yerevan could use heavy weaponry if “the logic of battle” called for it.

Azeri Foreign Minister Jeyhun Bayramov responded by saying that Baku has an “adequate response” ready for any potential escalation from the Armenian side, without giving any specifics.

Armenian President Armen Sarkissian has accused Turkey of directly providing Baku with military-grade drones, mercenaries and even the F-16s. Azerbaijan maintains that Turkey is not taking part in any fighting in Nagorno-Karabakh. Ankara has openly supported the latest offensive launched by Azeri forces on Sunday, despite numerous calls from its allies in the US-led NATO alliance to show restraint.

Fighting broke out along the entire line of control on Sunday, with Azeri troops clashing with ethnic Armenian soldiers in the disputed region. Artillery exchanges, tank battles and combat aircraft sorties were all reported, with both sides claiming civilian casualties on their own side and inflicting heavy losses on the other.

Azerbaijan considers Nagorno-Karabakh and a strip of territory connecting it to Armenia proper its own sovereign territory, illegally occupied by Armenians during the war that ended in 1994. Ethnic Armenians in the enclave have declared it the Republic of Artsakh, so far recognized only by Yerevan.