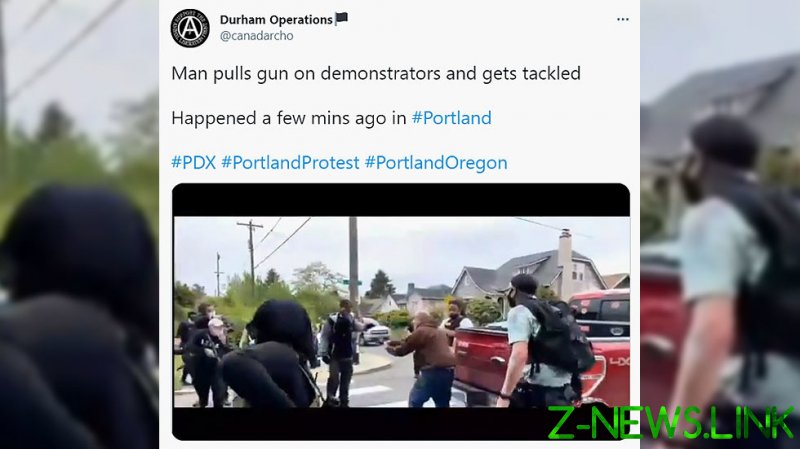 In the 28-second clip, the armed group aims at the driver of a red truck and tells him to put his “f**king gun down!” The video then skips to a later moment in the confrontation in which the driver gets out of the vehicle and is surrounded.

Shouts of “Get the weapon!” and “Get him on the ground!” are heard as the driver is gang-tackled after pulling out an object that appears to be a weapon and points it at the group.

According to the Portland Police Bureau, at roughly 12:12pm on Wednesday, officers were dispatched after receiving a report of a pedestrian struck by a car at a street protest near North Interstate Avenue and North Killingsworth Street in a residential area of the city.

When officers arrived, they “did not find any pedestrians who claimed to have been struck,” the police statement noted, adding that the “large group had moved away… some openly carrying firearms.”

By then, additional calls had come in from people whose vehicles were blocked by the crowd. Per the statement, one person told police the crowd had “broken their vehicle windows, damaged tires, and sprayed them with some kind of irritant” near the intersection.

The video posted on Twitter on Thursday by Durham Operations (the account’s description states it is a “propagandist for radicals”) was then shared by Portland-based journalist Andy Ngo, who attributed the incident to Black Lives Matter and Antifa, using hashtags.

According to a tweet by We Out Here Magazine, the group was part of a weekly protest march seeking “justice” for Patrick Kimmons, an African American man fatally shot by Portland police in 2018. It identified the armed individuals as “volunteer security” for the demonstration.

“When you’re coming from all the way down the street, seven blocks down, and you’re doing about 50 and you see a child or grown folks, it’s a problem,” said a woman who was identified as Kimmons’ mother, but not named, by local channel KATU in an interview.

According to the woman, this was the first such incident in the two years the protests have been going on. She said she was not “out here to harm anyone. I’m out here for justice for disabled people, black people, white people, Asian people, I’m not racist by any means necessary and I don’t want to have people being racist against me.”

Portland Police spokesman Lt. Greg Pashley told the channel that it was fortunate the violent scuffle did not escalate further.

“People need to voice whatever their concern is, but they need to do it in a way that’s reasonable, that’s lawful; otherwise, we run into very dangerous situations, where it sounds like we’re really lucky there wasn’t some very violent confrontation,” Pashley said.

Police are investigating both this incident and another altercation that appeared to have occurred elsewhere during the march.

In that incident, footage of which was livestreamed by Portland-based YouTuber PDXNinja, a person in another vehicle got into a dispute with demonstrators after being blocked by the march near North Alberta Street and North Michigan Avenue.

The individual was surrounded and had a firearm, tools and keys taken from him, according to the police statement, which also notes that “one person was transported by ambulance to the hospital following the altercations.”