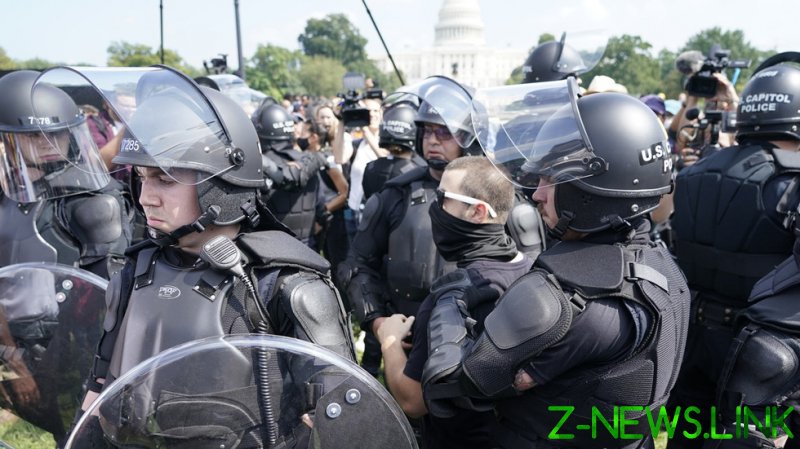 One of the four people arrested at the Saturday rally in support of those on trial for participating in the January 6 riot has turned out to be a federal law enforcement officer, who showed up at the gathering with a concealed handgun.

The man is reported to be a 27-year-old New Jersey native and an officer with US Customs and Border Protection. The officer’s arrest was one of the rare incidents involving police that marred an otherwise uneventful and peaceful rally.

The arrest was captured on video, and saw multiple Capitol police officers encircling the man. Upon finding a gun and what appeared to be a badge on him, police asked if he was “undercover” or “part of the event.” The man, however, dodged the question, saying that he was “just here” before being escorted away.

While some commentators suggested that Capitol police might have nabbed the man by mistake – due to the lack of real offenders –  the AP reported, citing two law enforcement officials, that the officer was not acting in his official capacity at the rally. The border protection agency tentatively confirmed that the man was one of their own, but assured that he was “fully cooperating with the investigation” while adding that it “expects officers to adhere to the oath they take to uphold the laws of this country.”

Nevertheless, the brush with the Capitol police will unlikely land the CBP agent in any legal trouble. Citing a spokesman for the US attorney’s office in Washington, AP reported that the prosecution was “not moving forward with charges” against him.

The rally which took place on Saturday received intense media attention, with pundits warning about an imminent threat stemming from protesters. Amid concerns that the protest could spiral into violence, a fence was erected around the Capitol, while the police enlisted support of multiple other agencies, including the National Guard soldiers that were put on standby. The heightened security measures were proved to be over-the-top, however, as the small crowd of demonstrators, vastly outnumbered by law enforcement officers, protested peacefully, with the organizer himself denouncing instances of violence that occurred during January 6 events.