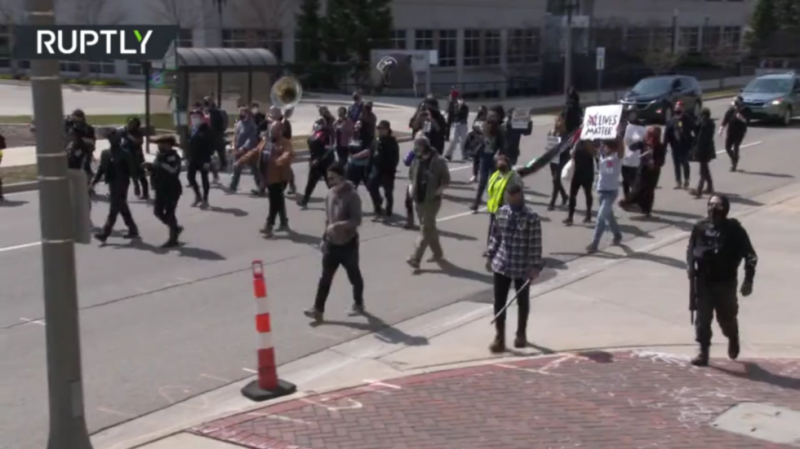 Around 60 people marched to the Lansing Police Department, where a 54-year-old white man named Anthony Hulon died in custody one year ago. They chanted “no justice, no peace,” a popular slogan among BLM and other activists protesting police brutality.

“I can’t even put into words how much I appreciate everybody coming out for us and all the different groups coming together for the same cause,” Anthony’s sister, Heather Hulon told RT’s Ruptly video news agency.

Several masked men armed with rifles were spotted at the event. Some local reports described them as members of the boogaloo movement, a loose association of gun owners, who also came to protest Hulon’s death. The groups reportedly remained separate during the rally.

Hulon was arrested in April 2020 for domestic assault and died less than 24 hours later inside a police station. According to security camera footage, four officers handcuffed and pinned Hulon to the ground in an attempt to restrain him, while he was saying, “I can’t breathe.”

Hulon’s family filed a wrongful death lawsuit against the officers involved. The officers were initially placed on administrative leave, but were later allowed to return to work. They were not charged with a crime. Local media reported on Saturday that the investigation by the Michigan attorney general’s office is ongoing.