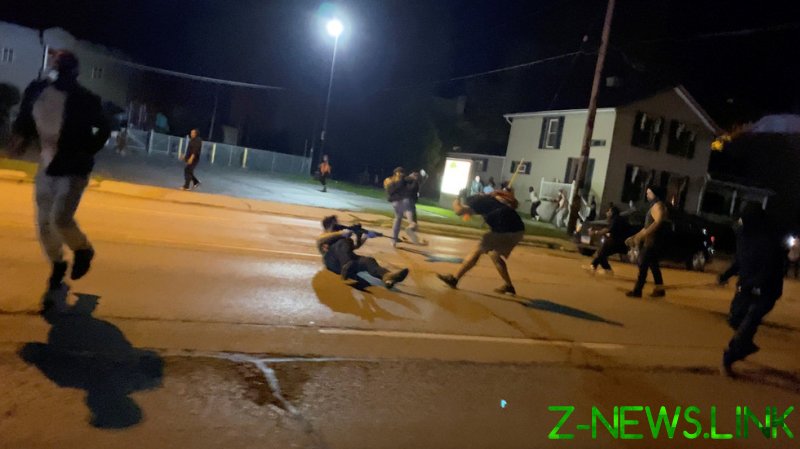 In the lawsuit filed on Thursday in the US District Court in Milwaukee, Grosskreutz argued that Kenosha law enforcement officers deliberately “conspired” with “white nationalist militia persons,” which led to Rittenhouse injuring him and killing two others.

Grosskreutz alleged that local authorities essentially deputized Rittenhouse and other “vigilantes,” allowing them to patrol the streets and “shoot and kill innocent citizens.”

Kenosha’s city and county governments, as well as police and sheriff’s department officers, were named as defendants in the suit. Ironically, Grosskreutz didn’t sue the teenager who shot him.

The case stems from several days of rioting in August 2020, after Kenosha police shot and injured Jacob Blake, a 29-year-old black man with warrants pending for alleged sexual assault and other crimes. Blake was armed with a knife at the time, but major media outlets claimed he had been unarmed.

Rittenhouse, then 17, was among counter-protesters who had come to Kenosha in what they called an attempt to protect people and prevent looting and arson. Rioters eventually got into confrontations with Rittenhouse and other armed citizens. At one point, 36-year-old Joseph Rosenbaum, who spent prison time for sexually assaulting five young boys, was caught on video repeatedly daring someone to “shoot me, ni**a.” Rosenbaum is later seen chasing Rittenhouse and trying to take his rifle away, at which point the teen shot and killed him.

Rittenhouse then ran toward a line of police down the street, but tripped and fell as a mob chased him and shouted for him to be beaten. One of the pursuers, Anthony Huber, a 26-year-old man with a history of domestic violence, hit Rittenhouse with a skateboard and was fatally shot as he tried to take his gun.

Then came Grosskreutz, who backed away after seeing Huber shot but then rushed Rittenhouse again. Video footage of the incident shows him holding a pistol in his right hand even after being shot in the bicep.

Kenosha authorities charged Rittenhouse with two counts of first-degree intentional homicide for the deaths of Huber and Rosenbaum, as well as attempted murder of Grosskreutz. He also faces two charges for reckless endangerment, reckless homicide and the possession of a dangerous weapon by a minor – as he was underage when he fired the rifle. His attorneys have argued he acted in self-defense. His trial is scheduled to begin November 1.

Grosskreutz’s lawsuit argued that Rittenhouse was given preferential treatment by police on account of his race.

“If a black child had shot three citizens with an assault rifle and was seen walking away from the scene of the shooting with the assault rifle in hand, while other citizens yelled he was an active shooter, he would have been shot dead,” the lawsuit said, adding that police supported the armed vigilantes because of their “systemic, racially discriminatory policies and practices.”

Although the lawsuit condemned Rittenhouse as a “white nationalist,” there has been no evidence reported to suggest that the teenager is racist or was racially motivated. His family has even sued Joe Biden’s presidential campaign for falsely tarring Rittenhouse as a white supremacist last year.

Grosskreutz, whose rap sheet included a charge of “armed while intoxicated,” reportedly said after the Kenosha incident that his only regret was not “emptying the entire mag” of his pistol into Rittenhouse. The activist is a member of The People’s Revolution Milwaukee, a social justice group that has demanded police reforms, including a slashing of law enforcement budgets and a requirement that all officers earn college degrees in such fields as “Africology” or “Latinx Studies.”

While some observers cheered on Grosskreutz’s lawsuit, saying they hope he gets a big payoff, others argued that he alone is to blame for getting himself shot.

“This is the guy who pretended to be a medic, then pulled a gun and attempted to murder Kyle Rittenhouse,” one commenter said on Twitter. “The only thing due to him is a prison cell.”

“Stumpy tried to enter a quick draw competition and lost. End of story. He deserves nothing,” said another critic.

Still another Twitter user agreed, saying “this guy was drawing a gun on someone who had already drawn a bigger gun.” He added that Grosskreutz is lucky to be alive and should “shut his crybaby mouth and worry about improving his decision-making skills.”