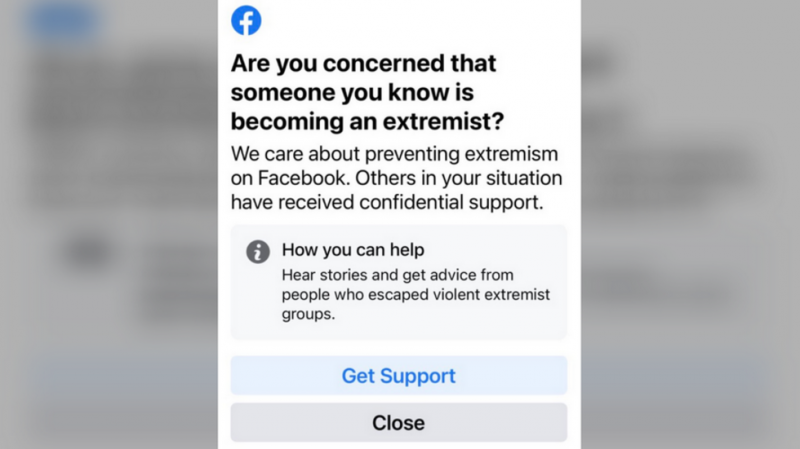 The platform rolled out the new test feature for certain US-based users on Thursday, part of its broader effort to combat “extremism,” according to Facebook spokesman Andy Stone. Baffled netizens quickly shared screenshots of the alerts online, some hinting at the pitfalls of enlisting users to root out so-called extremists.

Two different prompts have circulated, one asking “Are you concerned that someone you know is becoming an extremist?” while the other warns users that they “may have been exposed to harmful extremist content recently.”

“Violent groups try to manipulate your anger and disappointment,” adds the latter missive, exhorting netizens to “take action now to protect yourself and others.”

Some critics cited the move as reason to ditch Facebook for good, with one arguing that the site considers “thinking for yourself” a dangerous form of radicalism.

Another detractor called the new feature a “sinister warning… thinly disguised as a helpful nudge” while conservative journalist Jack Hunter took it as a sign that Facebook itself is “becoming extremist.”

The pair of notices also offered links to “support” resources, treating users to a series of factoids and attempts to address common arguments from “violent groups,” much of it apparently focused on anti-immigrant sentiments and hatred toward minorities.

“Some violent extremist groups wrongly say that for the United States to succeed, its citizens should all be of one culture,” one of the bullet points says, going on to explain the “amazing benefits” of diversity.

Spokesman Andy Stone told CNN the new feature is “part of our larger work to assess ways to provide resources and support to people on Facebook who may have engaged with or were exposed to extremist content,” adding that the site had partnered with NGOs and “academic experts” on extremism to bolster that effort.

While the Facebook prompts did not appear to offer a definition for “extremism” and left unclear exactly what groups and ideologies it has in mind, its decision to partner with Life After Hate, a Chicago-based NGO, could provide a hint. The group says its primary mission is to help people escape “the violent far-right,” apparently leaving other forms of left-wing and apolitical radicalism to different organizations.

It is unclear if the site has teamed up with any NGOs that focus on other ideologies beyond the political right for its new initiative.

Though Facebook has taken action against other groups in the past, deleting swathes of accounts linked to leftist militants last year, conservative critics insist the platform disproportionately targets voices right-of-center. Previous purge campaigns have heavily focused on right-wing content, such the ‘QAnon’ conspiracy and the ‘Boogaloo’ movement – including users who do not share violent posts.

Since the election of Donald Trump in 2016, Facebook has come under intense pressure from Democratic lawmakers and progressive activist groups to crack down on user-generated “hate speech,” “disinformation” and “extremism.” Those calls, which have only grown louder since the riot at the US Capitol in January, have prompted Facebook to carry out a series of mass-ban campaigns, as well as a number of other measures meant to combat “fake news” and radicalization on the platform, including a long-term ban for ex-President Trump.