Home / WORLD / ‘Are you a christian!?’ BLM activists harass restaurant patrons who refuse to raise fists and shout slogans (VIDEOS)

‘Are you a christian!?’ BLM activists harass restaurant patrons who refuse to raise fists and shout slogans (VIDEOS) 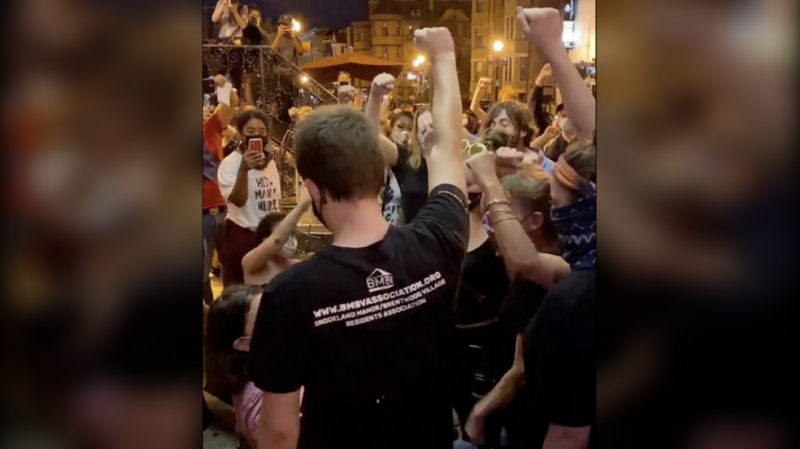 In one scene which spread like wildfire on Tuesday, a large group of white protesters can be seen crowding around the table of a white woman at a Washington DC restaurant and demanding that she raise her fist to comply.

“Are you a Christian?” one activist repeatedly yells. Others yell slogans including “White Silence is Violence” and “No Justice, No Peace.” As no videos have emerged showing the entire sequence of events, it’s unclear what, if anything, prompted such dramatic reaction from the protesters.

In another similar video, a black female activist is seen harassing a white couple sitting at a table outside the Mezcalero Cocina Mexicana in DC as other patrons look on from inside. A person off-camera can be heard calling the pair “white supremacists.” While that couple did not raise their fists in compliance, many others around them did.

Again, the videos did not show what happened before — or what led to — the verbal altercation.

It’s not the first time demonstrators have taken to interrupting diners in DC to share their message. In June, BLM demonstrators harassed diners at DC’s Pisco y Nazca Ceviche Gastrobar.

On that occasion, the group of demonstrators entered the restaurant shouting what sounded like a prepared script.

“While you are dining, we are sorry for your inconvenience, but black people are dying today,” they shouted, before saying they would read off facts about police brutality against black people.

Video of the latest incidents drew harsh backlash on Twitter. Former New York Times columnist Bari Weiss called the scenes “vile and un-American,” while journalist Mark Hemingway said the behavior was “outrageous” and “has no place in a free society.”