Home / WORLD / ‘Are we at war?’ Police fire tear gas and flashbangs amid BLM protests in Minnesota (VIDEOS)

‘Are we at war?’ Police fire tear gas and flashbangs amid BLM protests in Minnesota (VIDEOS) 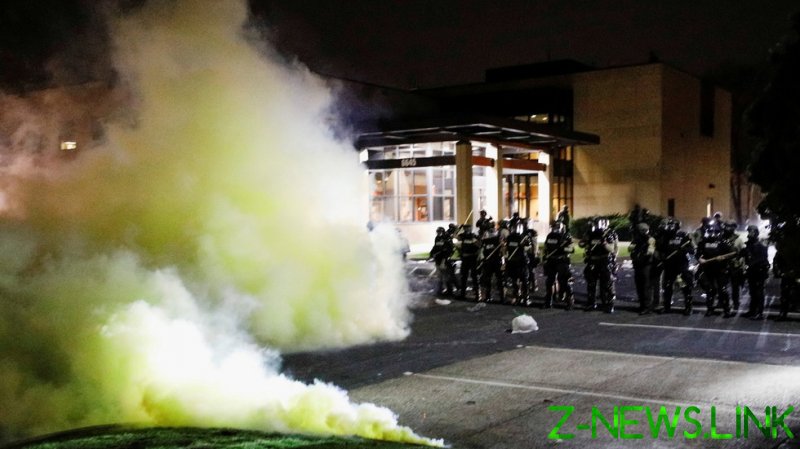 A video from the scene shows a crowd of protesters standing near clouds of tear gas. A woman is heard yelling: “We’re not f**king going anywhere! We’re f**king staying!”

“Are we at war?” a person asks after several flashbangs explode.

According to Andy Mannix, a reporter for the Star Tribune, protesters marched to the police station, when officials declared the mass gathering unlawful. Police fired tear gas to disperse the crowd.

People poured water in each other’s eyes after being hit by the irritant, Mannix tweeted.

The Star Tribune reported that National Guard troops arrived just before midnight after looters attacked a local Walmart and a nearby shopping mall, and that rubber bullets were used against the protesters.

Brooklyn Center Mayor Mike Elliott announced on Twitter that he would be issuing a curfew.

Tensions were inflamed after police shot a 20-year-old black man named Daunte Wright on Sunday afternoon, after what was initially a routine traffic stop. Police claimed that Wright had an outstanding arrest warrant and tried to avoid being taken into custody by reentering the vehicle and driving away. His family blamed the police for his death.

The protests took place amid the trial of former Minneapolis police officer Derek Chauvin, which is set to resume on Monday. Chauvin is accused of killing George Floyd by kneeling on him during a botched arrest attempt in May 2020.

Floyd’s highly-publicized death triggered protests against police brutality and racism across the US and abroad. Some of the rallies and marches were followed by rioting, looting, and vandalism.