Archeologists made a unique discovery about the “Alpine ice man” 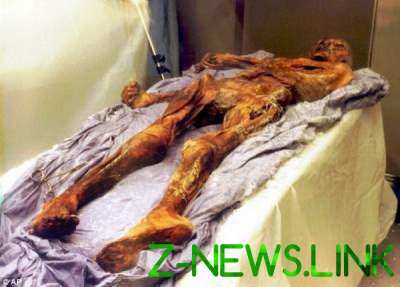 Scientists have discovered the possible home of “Alpine ice man”.

Experts believe that it is in the territory of Switzerland, as they found axe, with the resemblance with the copper product, which is found near the Alpine mummy.

Archaeologists said that discovered in Switzerland, the axe is also made of copper.

In composition it is similar to the one made by axe, discovered in Tuscany. “Ice man” unearthed in 1991. Its age is dated to the 4th Millennium BC. The mummy called Oetzi. Presumably, he died from wounds received in the war between the tribes. The conflict between the ancient inhabitants of those lands were not uncommon. After genetic examination, the scientists found that maternal “ice man” was alpicam, and paternal genes have indicated its relationship with the tribes that lived in Sardinia.

The axe-like weapon found in Oetzi, discovered during the excavations of lake Zug. It is dated to the same period, however, this is only preliminary data. More examination will show.