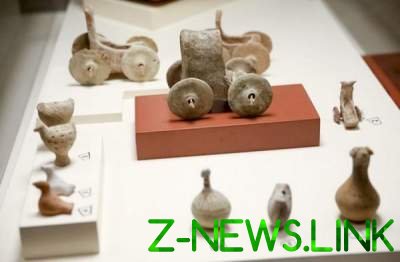 This is a unique toy car from clay that resembles a chariot.

Turkey made a very unexpected discovery during excavations of the ancient graves. Archaeologists caught the eye of a toy car, which is 5 thousand years.

Should mention, the car is a young invention, it is not more than two hundred years. So much more to say about the discovery of “vehicle”, which is more reminiscent of the chariot. There is nothing surprising in the fact that children in ancient times had toy carts.

See also:  The Chinese want to extract minerals on asteroids

This theory has been repeatedly confirmed by archaeologists. In the town Sogmatar, which is located near the Turkish city of Sanliurfa, the researchers were able to find a number of ancient graves. Excavations took place in the spring of this calendar year.

In one of the graves archaeologists found children’s toys, including a small chariot. Scientists believe that it could belong to a child of a noble man, while clay toy belongs to the Bronze age. Her age was 3 thousand years before Christ.