Home / Science and technology / Apple has released an analogue of AirPower

Apple has released an analogue of AirPower 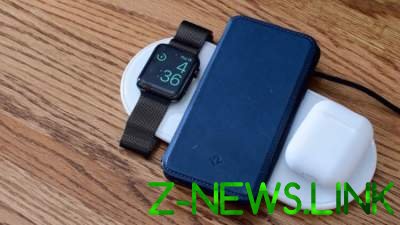 AirUnleashed – another attempt to produce a clone of AirPower from the startup.

The news of the cancellation of the charging station, AirPower was a real shock to many Apple fans. No one could not assume that the company will close the project after almost two years since the announcement, and not releasing the promised product to the masses.

But to cheat the physics was not under force even Apple, which in the end was forced to admit that the idea to place in the station body more induction coils was obviously a failure. It is interesting to observe how this problem is solved by independent businesses who are trying to create analogues of AirPower.

AirUnleashed – another attempt to produce a clone of AirPower from the startup. However, in contrast to previous solutions like charging stations from Nomad, AirUnleashed looks almost exactly the same as the original Apple product, offering to simultaneously recharge up to three devices at once. AirUnleashed allows you to charge not only the iPhone and the AirPods, but also the Apple Watch, from charging which, apparently, by the end of the project refused to even Apple itself.

The best analogue of AirPower

As expected, the developers Unleashed did not fool physics, and therefore to charge the Apple Watch on the hull were made of a special contact area with a hidden magnetic convector. Because of this, each device should be placed on the surface AirUnleashed in sequence, with iPhone, Apple Watch, AirPods. The initial project is Apple’s assumed that the watch can be charged from the station directly without the need to connect to the magnetic platform and the other device can be placed in any order.

AirUnleashed is equipped with three induction coils and supports fast-charging technology Quick Charge 2.0 and 3.0, and power up to 15 watts. The first user out of the box, while the second is offered as an option. To activate it, have to buy a compatible power supply cost US $ 9. The accessory was priced at $ 99. Its sales will begin may 15, but the manufacturer promises free worldwide shipping to everyone who orders before this date.