Apple & Google are ‘accomplices of censorship,’ Rubio blasts, after US tech giants remove Navalny content in line with Russian law 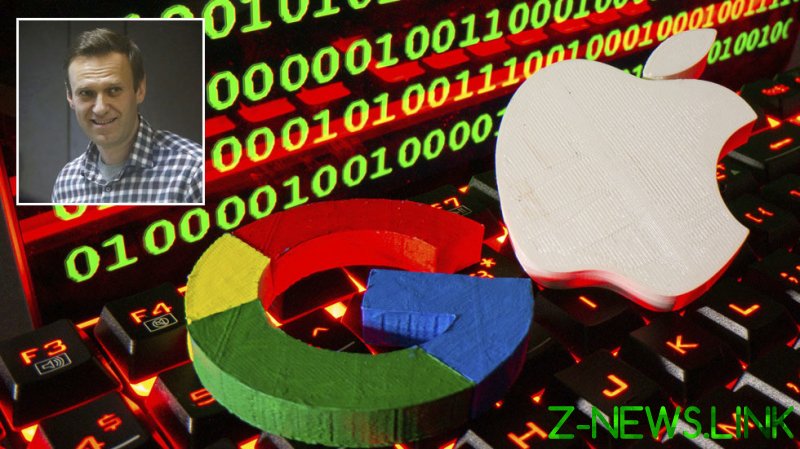 In the appeal to Google boss Sundar Pichai and Apple CEO Tim Cook, made public over the weekend, Rubio attacked the decision to comply with Russian law and remove content produced by associates of jailed opposition figure Alexey Navalny. The two companies removed their ‘Smart Voting’ app from stores in a move Rubio claims undermined last month’s parliamentary elections.

The service was designed to recommend candidates best placed to defeat those for the ruling United Russia party. Navalny’s team believes it can tip the balance in tight races, but critics say it’s merely a PR stunt piggy-backing on politicians who are already doing well in the polls and trying to claim credit for their success, especially in the Western media space.

In September, Russia’s media regulator, Roskomnadzor, blocked the ‘Smart Voting’ website, due to its link to Navalny’s network of organizations, which were banned earlier this year after a court ruling deemed them to be extremist. Since then, they have been effectively prohibited from operating in the country.

“By bowing to Moscow’s demand, Google and Apple have made themselves complicit in the censorship of an oppressive, authoritarian regime,” Rubio wrote. “You have set a disturbing precedent for both of your companies and their peers – one with ramifications for billions of users of your technologies worldwide.”

In his letter, Rubio stated that the app had been removed at “a critical moment” just before voting began, and explained that it had been “designed by a Navalny-led campaign to consolidate protest votes and recommend the political candidates that were best positioned to defeat United Russia.” The ruling party secured close to half of all votes cast in last month’s parliamentary poll, and returned to power with a two-thirds ‘supermajority,’ allowing it to pass constitutional reforms without the need to rely on other parties.

The biggest gains were for the opposition Communists, who saw their numbers increase by around 50% compared to the 2016 contest (seven million votes to 10.6 million). The party’s leader denounced Navalny earlier this year, saying he was not a political figure, but a tool of American interests, and likening him to pro-Western 1990s president Boris Yeltsin. According to Gennady Zyuganov, Navalny has been groomed by foreign intelligence services to set up a revolution, which he likens to the Ukrainian Maidan in 2014.

“He is not his own boss. He works with experienced specialists who promoted other people before him,” the veteran politician claimed.

Vasily Piskarev, the head of a State Duma commission investigating foreign interference in Russia’s domestic affairs, said after the vote that there had been a concerted campaign to encourage tech giants not to comply with Roskomnadzor’s orders: “More than 20 organizations in total during the election campaign openly called on Facebook, Twitter, and Google not to comply with the authorities’ orders and to ignore Russian legal requirements to take down banned content.” The foreign NGOs now face potential bans.

Both Apple and Google have insisted they must adhere to the legal requirements of the countries in which they operate. In a letter to the ‘Smart Voting’ app creators, Apple explained that applications were prohibited if they “solicit, promote or encourage criminal or clearly reckless behavior.”

The question of Big Tech’s role in elections has come to the fore in Russia in recent weeks, after the country’s Foreign Ministry summoned US ambassador John Sullivan to present him with a dossier of evidence purportedly showing that American tech companies were exerting undue influence on the campaign.

“The evidence was given to him,” Foreign Minister Sergey Lavrov said. “It is quite serious, really. We are still waiting for an answer from our American colleagues as to why this is happening.”