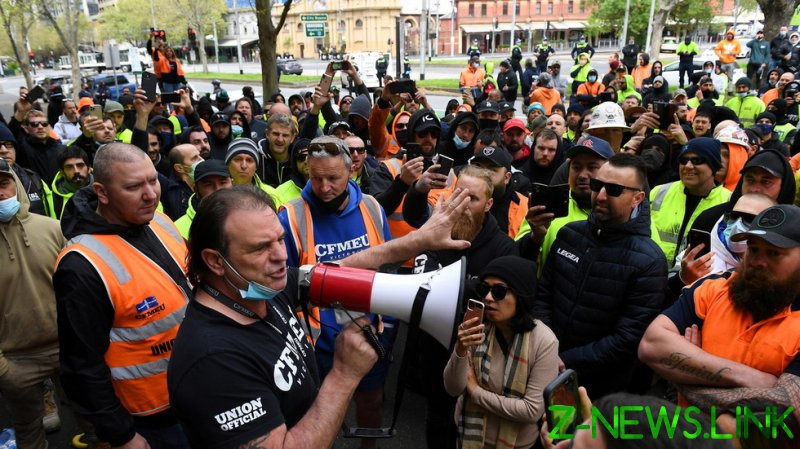 Andrews claimed many of the people at Tuesday’s protest in Melbourne were agitators – not real construction workers – and their “appalling” and “unlawful” conduct shouldn’t reflect on the many “fine people” he’s met in the building industry. “They’re not there to protest, they’re there for a fight,” he told reporters on Wednesday. “They’re there to pretend to be protesting.”

Tuesday’s “F**k the jab” protest brought traffic on Melbourne’s West Gate Bridge to a standstill, and riot police fired rubber bullets and smoke canisters to control the crowd. Protesters tossed objects at police. Police said 62 people were arrested, some for assaulting officers, three of whom were injured.

The pushback erupted on Monday outside the Construction, Forestry, Maritime, Mining and Energy Union (CFMEU) offices, after Victoria ordered construction workers to get vaccinated against Covid-19. The intensity of the clashes led such observers as UK journalist Paul Joseph Watson to question whether Australia was starting to see a revolt akin to the “yellow vest” protest movement in France.

Like Andrews, CFMEU National Construction Secretary Dave Noonan was quick to try to delegitimize the protests, blaming “right-wing extremists” for hijacking the conflict. Journalist Avi Yemini denied the claim, saying most of the protesters were “100% CFMEU members.”

Andrews said the vaccine mandate was justified for building tradesmen because the construction industry has a relatively high rate of Covid-19 infections. And rather than being swayed by the anti-mandate message, the premier said forced inoculations will be expanded.

“Other groups of workers in our community are going to have to get the jab to keep our state safe . . .,” he said. “Vaccination works. Vaccination is our pathway out of this.”

Victoria’s chief police commissioner, Shane Patton, urged people not to take part in further anti-mandate protests on Wednesday. “I certainly understand that people are fatigued, they’re tired, they have got grievances and they’re frustrated, but now is not the time for protest,” he said.

While Patton went further than Andrews and other officials in acknowledging that at least some protesters have sincere concerns, he suggested that anyone who tries to demonstrate on Wednesday will be met with force. “You’re not going to be welcomed with open arms, I can assure you that,” he said.