Home / WORLD / Aping US tactics against foreign enemies, a Democratic city seeks to impose SANCTIONS on Texas for its abortion restrictions

Aping US tactics against foreign enemies, a Democratic city seeks to impose SANCTIONS on Texas for its abortion restrictions 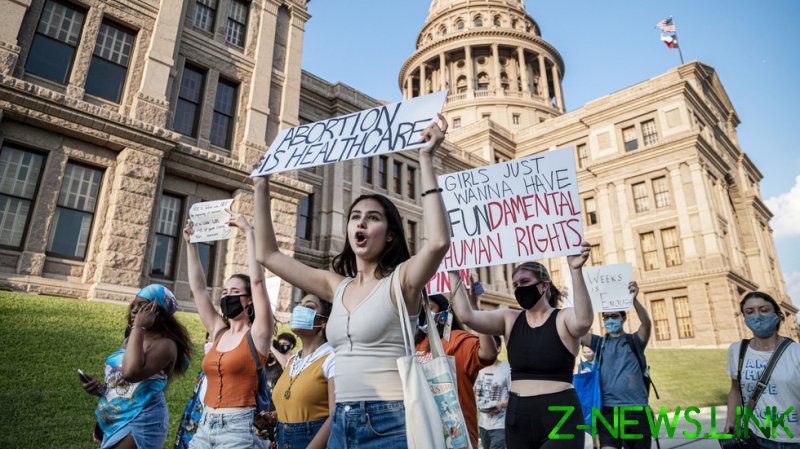 Since banning abortions after a fetal heartbeat can be detected (which can occur as early as six weeks into pregnancy), Texas has faced a predictable onslaught of criticism from pro-choice activists, celebrities, and even corporations. But now, the city of Portland, Oregon is escalating its dissent even further, by proposing a resolution that would effectively sanction the state.

No abortions, no business

As a well-known bastion of progressive politics, next week Portland will be voting to prohibit the trade of goods and services with Texas, while also barring city employees from travelling there for business.

In a press release, the city states that:

“The ban will be in effect until the state of Texas withdraws its unconstitutional ban on abortion or until it is overturned in court. City legal counsel is currently evaluating the legal aspects of this proposed resolution. The Portland City Council stands unified in its belief that all people should have the right to choose if and when they carry a pregnancy and that the decisions they make are complex, difficult, and unique to their circumstances.”

Although Portland’s condemnation has been cheered by pro-choice advocates, as the city faces issues such as a surging crime rate, a growing homeless population, and militant Antifa cells, some might wonder whether city council’s resources would be better spent addressing problems that directly affect their constituents, rather than the policies of a state over a thousand miles away.

It is also worth noting that notoriously illiberal countries, such as Saudi Arabia, Iran, and even Afghanistan, have faced no such targeted condemnation from the city of Portland.

But what about States’ rights?

Even though Portland currently stands alone in potentially barring trade with Texas, intrastate sanctions are not a novel concept. Similarly, California has also banned state-funded travel to 17 different states, including Texas, Florida, Tennessee, and Alabama, over what it alleges are “anti-LGBT” policies. And in New York, two state legislators have previously attempted to implement travel restrictions to Georgia over the state’s voter ID laws.

And while Mayor Ted Wheeler of Portland and Californian officials may try to paint these sanctions as simply taking a principled stance, the cynics among us will more likely view the resolutions as an attempt to economically and socially manipulate other states into acquiescing to their political whims, rather than the desires of their own residents. States may previously have been referred to as “laboratories of democracy” for their ability to independently implement and test out different policies but, in today’s political climate, it seems that the appetite for conformity now views states’ rights as a negative, rather than positive, aspect of the American system.

Advocates of federalism have long warned that a ballooning federal government risks becoming less representative of local interests but, should interstate retaliations become the political norm, Americans may soon be facing a reality in which it is not Washington, DC, that holds all the power, but rather the biggest or richest state, able to inflict the most pain on any other state that should oppose it.

Some may say though that, for example, a scenario in which California economically cripples Mississippi is impossible due to the Constitution’s Commerce Clause, the Sherman Act, and the Clayton Act, among other legal barriers. But in an era when a plurality of Americans question even the integrity of Presidential elections, and accusations of systemic bias and corruption abound, is there any guarantee that American institutions – including the court system and Congress – will function as intended?

What is also interesting about these interstate penalties is that, at the moment, they seem to exclusively exist as a way for leftwing states (or cities) to punish rightwing states. In an increasingly polarized country, Democrat-supported policies like taxpayer-funded abortions and the teaching of Critical Race Theory in schools are at least as morally repugnant to Republicans as any number of Republican policies are to Democrats. However, as of yet, there have been no calls for Florida to ban state-travel to California, or for Texas to bar trade with Oregon.

But as the culture war continues to escalate, and as conservative voters increasingly flock to figures such as Donald Trump and Florida governor Ron DeSantis, who, unlike timid GOP favorites of old such as Mitt Romney, are more than happy to go on the offensive, how long will this remain the case?

A Union no more

Ultimately, Portland’s condemnation of the Texas abortion ban is merely a symptom of the country’s chasmic political division. Regardless of whether the city trades with Texas, the fact remains that around half of Americans consider themself pro-life, the other half pro-choice, and both sides are more likely than ever to view the other as morally abhorrent.

As social tensions continue to rise, we’re all but guaranteed to see the same in the political sphere.