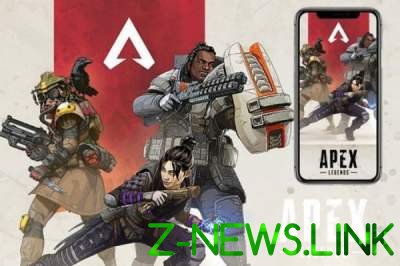 Apex Legends appeared on consoles in the beginning of February.

Fortnite and PUBG on the mobile games market has achieved unprecedented success and EA plans to follow their example. Mobile gamers can expect Apex Legends from developer Respawn will appear on mobile devices in the near future.

At least you can make such a conclusion based on the comments made by EA in a recently published quarterly financial report. Mobile version of Apex Legends will allow players to fight with your smartphone or tablet.

Apex Legends appeared on consoles in the beginning of February as a free game in the genre of battle Royale, offering gamers a more Mature alternative to Fortnite. Game Respawn was a huge success, achieving a million downloads in the first month.

See also:  Apple told what to expect from the iPhone 8

Despite assumptions about the short-term nature of the success of the game, Apex Legends reached the milestone of 50 million players.On Tuesday, EA has published a quarterly profit, where he shared some plans for the Apex Legends. “Creativity, innovation and fun this game immediately distinguish it,” said the company, and “smooth gameplay mechanics” was called “primary experience”, which offered gamers “the excitement and competition, which they craved”.

According to the company, nearly 30 percent of the players Apex Legends was completely new to EA. The company also mentioned that “actively working” on the release of Apex Legends in other markets and on other platforms.

“We are in preliminary talks on the transfer of Apex Legends in China and on mobile devices”, – stated in the quarterly report EA income. Unfortunately, the company did not provide any additional information about this plan, saying only that she would have more information after the meeting.