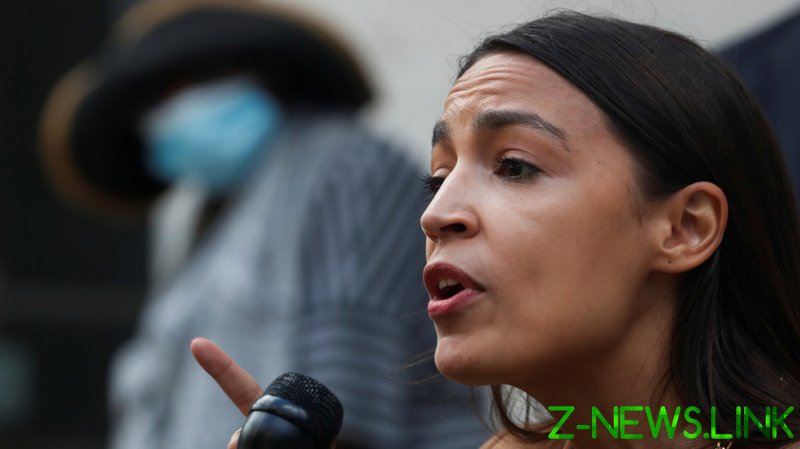 Frontline provides Democrats most at risk of losing their seats in the November 2022 mid-terms with “resources and cutting-edge information they need to execute effective reelection campaigns” – in other words, it aims to ensure they can survive the toughest races.

In all, the 32 candidates received $5,000 each from Ocasio-Cortez – but for some recipients, their comrade’s show of solidarity came as an “unwelcome surprise.” The DCCC allegedly failed to “anticipate the political ramifications” of the Democrats’ “most polarizing figure” being named on the Federal Election Commission reports of the party’s most vulnerable members.

“Ocasio-Cortez’s largesse [has] raised awkward questions among her colleagues as some swing-district Democrats fret over whether to return her money before the GOP can turn it into an attack ad,” Politico recorded.

The outlet named three Democrats who had so far indicated they would be returning her donation – Carolyn Bourdeaux of Georgia, Conor Lamb of Pennsylvania, and Elissa Slotkin of Michigan.

Whether the contributions will harm the trio’s electoral prospects in any event isn’t certain, although it seems somewhat odd that Ocasio-Cortez would provide Lamb and Slotkin with financial backing in the first place.

The former served in the US Marines from 2009 to 2013, and remains a reserve captain in the force to this day. In July 2018, not long after his election to Congress, he was one of a group of Democrats who voted in favor of a resolution praising the work of Immigration and Customs Enforcement (ICE), which at the time was embroiled in significant controversy over its enforcement of the Trump administration’s “zero tolerance” immigration policy.

Under the scheme, thousands of children were separated from their parents at the US-Mexico border and placed in detention camps, with no assurance the families would ever be reunited. This led numerous high-profile Democrats – including Ocasio-Cortez – to propose defunding or even abolishing ICE. The resolution Lamb signed conversely took aim at “rhetoric being pushed by the left” on the issue, and hailed the agency’s staff as “America’s frontline defenders” in key regards.

He also in February 2020 voted against a measure seeking to limit then-President Donald Trump’s ability to use military force against Iran.

Slotkin, meanwhile, joined the US Central Intelligence Agency (CIA) as Middle East analyst in the wake of the 9/11 attacks, subsequently serving three tours in Iraq as an agent, before being promoted to national security roles under Presidents George W. Bush and Barack Obama.

Until January 2017, she oversaw defense policy for Africa, the Middle East, and Europe at the Pentagon as the acting assistant secretary of defense for international security affairs, which would’ve entailed a not-insignificant role in the Obama administration’s extensive worldwide drone war program.

Her campaign was enthusiastically endorsed by a host of high-profile US national security state figures, including John Negroponte, to whom she was senior assistant while he served as the first ever director of national intelligence between 2005 and 2007. He said the US “[needs] more elected leaders like her – mission focused, results oriented, who put the security of our country before politics.”

Negroponte’s own “mission focused, results oriented” approach while US ambassador to Honduras from 1981 to 1985 saw him turn a blind eye to the government’s use of death squads to kidnap, torture, rape, and murder anyone suspected of supporting leftist movements in the country or elsewhere in Latin America. He also actively undermined peace efforts in the region, and worked closely with then-CIA director William Casey on the Ronald Reagan administration’s continent-wide anti-communist offensive, which produced untold bloodshed.

Lamb and Slotkin are just two of a great many Democrats with extensive military and/or intelligence backgrounds elected to office in recent years. The November 2018 mid-terms saw 57 such veterans run for Democratic Party nominations across the US, in 44 separate congressional districts, amounting to a not-insignificant and entirely unprecedented infiltration of the party. Some primary races pitted candidates drawn from separate national security agencies against one another.

Strikingly, several other Frontline members were among the clutch of military and intelligence old hands elected on Democratic tickets that year, who likewise aren’t obvious political bedfellows for Ocasio-Cortez, the first female member of the Democratic Socialists of America to serve in Congress.

Abigail Spanberger of Virginia, for instance, spent many years working for the CIA, during which time she “traveled and lived abroad collecting intelligence, managing assets, and overseeing high-profile programs.” This experience is said to have taught her “the value of listening.”

She defeated Republican incumbent Dave Brat in 2018, ending a 36-year Republican hold on her district, and ever since has repeatedly clashed with Democratic progressives, for instance slamming Ocasio-Cortez’s own Green New Deal proposals.

In a leaked recording of a telephone call following the 2020 mid-terms, Spanberger also took aim at the party’s alleged focus on socialism and defunding the police in its election efforts, which she claimed meant she “barely” won, arguing the party should concentrate instead on Republican campaign ads before deciding how to approach particular issues.

“If we are classifying Tuesday as a success from a Congressional standpoint, we will get f**king torn apart in 2022… We need to not ever use the words ‘socialist’ or ‘socialism’ ever again… We lost good members because of that,” she fulminated.

In response, Ocasio-Cortez branded such finger-pointing “irresponsible,” claiming it amounted to “[pouring] gasoline on what is [sic] already very delicate tensions in the party.”

Calls for unity and aversion to in-fighting are in principle creditable, but nonetheless stand completely at odds with pledges Ocasio-Cortez and other prominent left-wing Democrats such as Bernie Sanders made upon their public endorsement of Joe Biden in the 2020 presidential election.

That backing, for a candidate wholly rejected by their own supporters, was publicly predicated and defended on the notion that once Biden was elected, those “delicate tensions” would be thoroughly and deliberately inflamed in order to aggressively push a left-wing policy agenda.

In August election year, Politico reported that while the party’s established “left flank” was “creating super PACs [Political Action Committees] and promising to spend millions to elect Biden in a way they never did for [Hillary] Clinton,” they were simultaneously “planning to give him hell the minute he sets foot in the White House,” adding that “unlike with Obama, there will be no honeymoon.”

One such strategy mooted by activists was “primarying” Democratic lawmakers in both houses who opposed legislation such as Medicare-for-All – in other words, working to ensure single-payer advocates replaced opponents in election battles, then elevating them into office to fight the policy’s enemies in Washington’s legislative chambers.

Almost three months into Biden’s presidency, there is no sign whatsoever of any even perfunctory effort by these elements to give the Oval Office resident “hell” on any issue.

Ocasio-Cortez has loudly criticized the administration’s failure to make good on its much-promoted $2,000 stimulus check pledge, and the reopening of a detention center for migrant children in Texas, stating such an action “never will be okay – no matter the administration or party.” However, this sound and fury is much less effectual than gifting sums to Democratic candidates viscerally opposed to her stated agenda, and committed to ensuring the party remains indistinguishable from its ostensible rival on every key question.

In June 2019, then-presidential candidate Biden assured wealthy donors at a fundraising event that if elected, he wouldn’t “demonize” the rich, no attendee’s “standard of living” would be adversely affected, and “nothing would fundamentally change.” Prophetically, it does very much seem like business as usual on Capitol Hill today – and the impervious status quo is now being reinforced by the unlikeliest of sources.