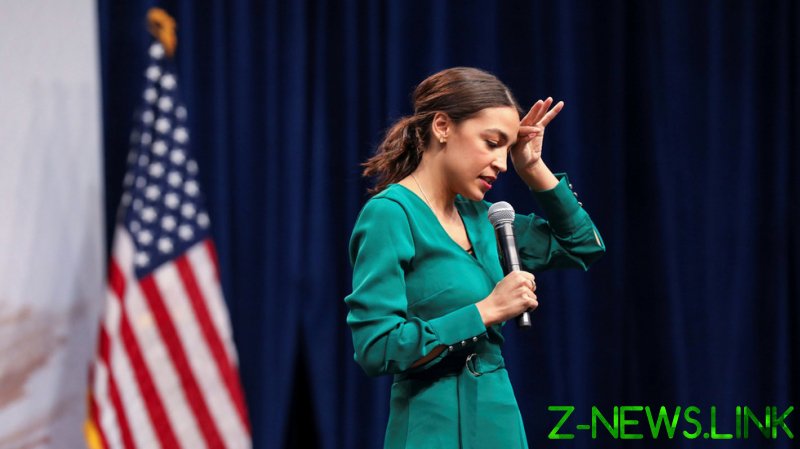 The hashtag #AlexandriaOcasioSmollett trended on Wednesday, following a fact-check of AOC’s (D-New York) Instagram livestream two days prior by OAN journalist Jack Posobiec. During her emotional 1.5-hour-long talk, Ocasio-Cortez admitted she was not in the Capitol building during the riot to begin with, but continued to claim that she experienced a life-threatening situation.

When Ocasio-Cortez denounced it as a “manipulative take on the right,” Posobiec posted a map, with arrows pointing to the Capitol as well as two other office buildings across the road. One of them is where AOC’s own office is located, and where she claimed she “thought I was going to die” during the January 6 events. Another is where she ended up sheltering inside the office of Rep. Katie Porter (D-California) after leaving her office on instructions of the Capitol Police.

“This isn’t a fact check at all,” Ocasio-Cortez responded to Posobiec’s post. “Your arrows aren’t accurate. They lie about where the mob stormed & place them further away than it was.”

She accused Posobiec of failing to show that demonstrators were trying to “storm” multiple areas, or showing “tunnels” between the Capitol and other office buildings – which to a lot of people sounded like moving the goalposts and not in line with her original description. Her post was quickly ratioed on Twitter, and the hashtag comparing her to Jussie Smollett began to trend.

A crowd of supporters of President Donald Trump had gathered outside the main Capitol building on January 6, eventually breaking inside and disrupting the joint session of Congress meeting to certify 2020 presidential election results. During the Monday night Instagram live-stream, Ocasio-Cortez described how she hid in the bathroom of her office, located in the Cannon House Building, and thought she was “going to die.”

However, she then admitted that the man who rushed into the office and supposedly looked at her with “anger and hostility” turned out to be an officer with the Capitol Police – who are now treated by Congress as heroes who opposed the “insurrection” against “our democracy.”

The officer then instructed her and her staffer to go to the Longworth House Office Building – the one where Porter’s office is located, and the one that Ocasio-Cortez claims some protesters later tried to storm. There is no publicly available evidence any of the rioters got anywhere close to Ocasio-Cortez’s whereabouts, and Congresswoman Nancy Mace (R-North Carolina), who has her office two doors down from that of AOC’s, has said that “insurrectionists never stormed our hallway.”

However, Ocasio-Cortez has already sought to fend off any backlash by comparing criticism to a “tactic of abusers,” as she revealed she’s also a “survivor of sexual assault.”

This appeared to be a reference to a letter by 13 House Republicans demanding an apology from her for accusing Senator Ted Cruz (R-Texas) and others who challenged the 2020 election results as trying to have her “murdered” by supposedly “inciting” the rioters. Her January 28 tweet targeting Cruz said she was “happy to work w/ almost any other GOP that aren’t trying to get me killed.”

Smollett, who AOC scored comparisons to, shot to fame in February 2019, after accusing two Trump supporters of a racist and homophobic attack in Chicago. He quickly garnered sympathies from the media, activists and Democrats such as then-senator and current Vice President Kamala Harris. When the police located the men who allegedly doused him with bleach and put a noose around his neck, they turned out to be Nigerian immigrants who said the ‘Empire’ actor paid them to stage the “attack.”

Whatever the truth about AOC’s alleged sexual assault and near-death experience at the Capitol, some of the critics of the progressive social media star noted that she had successfully diverted attention from problems with the government and the small investor rebellion against hedge funds.