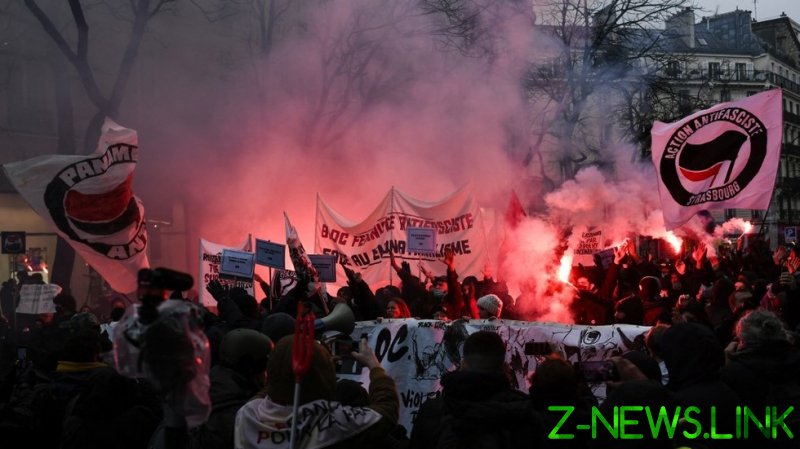 Wearing black and concealing their faces with masks and neckerchiefs, crowds of left-wing ‘Antifa’ protesters turned out in Paris, France, on Saturday, in what they said was a rally “against state violence and the extreme right.”

Clashes soon broke out between the demonstrators and the ranks of police officers there to maintain order. It is not clear which side instigated the violence, but video footage posted to Twitter by a police officer shows the left-wingers hurling projectiles at a group of retreating cops, before picking up metal crowd-control barriers to attack the officers with. The officer posting the video claimed that the “thugs in black” had struck first.

Another video shot by a self-described “independent journalist” showed a small group of officers being “taken to task” by the rioters, who tore down fencing and used it to assail the withdrawing policemen.

Footage from earlier in the afternoon shows rioters dismantling barricades and setting off flares, which apparently marked the point at which the demonstration turned violent. Police responded by firing tear gas into the crowd. It is unclear how many people, if any, were arrested.

Similar scenes played out in Marseille on Friday, where Antifa turned out to protest the arrival of Eric Zemmour, a right-wing commentator and likely presidential candidate. Zemmour has described Marseille as “a city submerged by immigration and partly Islamized.”

Saturday’s protest played out against the backdrop of wider demonstrations against the government’s Covid-19 restrictions and the strict French health pass system – which will require all adults to have received vaccine booster doses by mid-January to enter bars and restaurants and to use public transportation. Face masks became mandatory on Friday for all indoor settings regardless of the wearer’s vaccination status, and are required even in outdoor Christmas markets.