Home / WORLD / ‘Antifa are thrilled to hear this’: Portland police ask protesters not to start blazes amid statewide wildfire emergency

‘Antifa are thrilled to hear this’: Portland police ask protesters not to start blazes amid statewide wildfire emergency 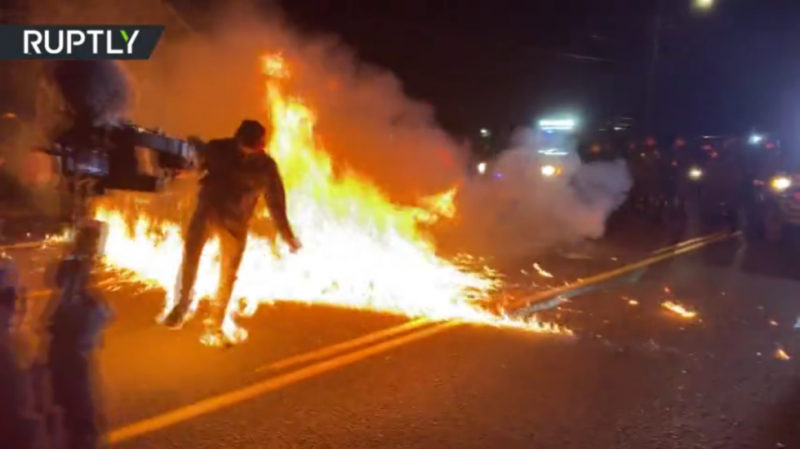 Wildfires in the state have consumed at least two towns, turned the skies red, caused ash to fall like rain and filled the air with thick, acrid smoke.

“This is proving to be an unprecedented and significant fire event for our state,” Brown said on Tuesday.

Despite the threat of wildfires, protests in Portland continued overnight, with clashes reported between protesters and police, resulting in several arrests. The police issued a call to the protesters not to start fires.

Some wryly remarked that Antifa would be ‘thrilled to hear’ these pleas from the police, while others suggested the black bloc protesters volunteer to fight the wildfires plaguing the state.

Amid widespread cries to defund law enforcement, it has been reported that the Portland Police Bureau has spent $6.9 million on overtime in June and July to help quell the anti-police brutality protests, which began at the end of May following the death of George Floyd in custody in Minneapolis.

Meanwhile, some 1,400 inmates from three state prisons – Mill Creek, Santiam and Oregon State Correctional – were evacuated to escape the oncoming fires and moved to the Oregon State Penitentiary in Salem.

In the vicinity of Portland, fires burned through Washington and Clackamas Counties, spreading up Mount Hood, and thousands were placed on standby evacuation orders.

For the first time in its history, Portland General Electric was forced to shut off the power in several areas in the interests of public safety.

The Santiam fire, previously called the Beachie Creek fire, and the Lionshead fire, is estimated to have burned through at least 200,000 acres.