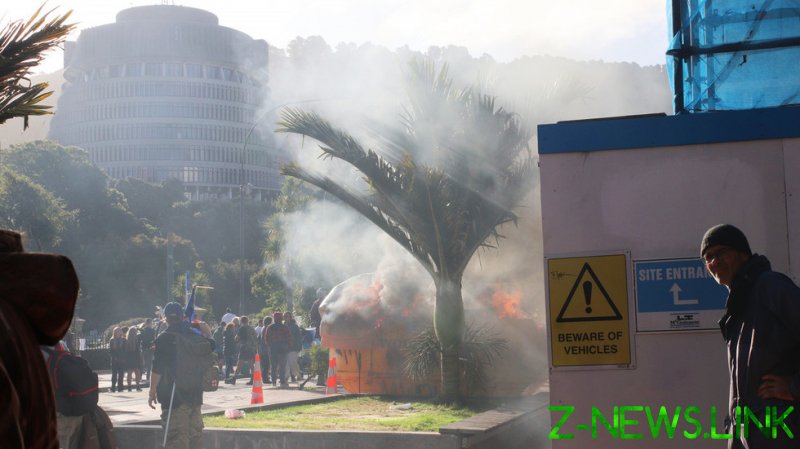 Footage from outside New Zealand’s parliament building showed violent clashes on Wednesday between police and anti-vax protesters, who have been demonstrating there for nearly four weeks.

Hundreds of officers in riot gear moved in on the camp where protesters had gathered, destroying tents, removing vehicles and making 38 arrests. Authorities responded using tripwires, plywood shields, pitchforks and fire extinguishers in a bid to repel police.

Addressing the situation in parliament on Wednesday, New Zealand Prime Minister Jacinda Arden stated that “police expected there would be hostility, resistance and violence” but what was happening was “another thing entirely to witness.”

She confirmed that a number of police officers had been injured in the clashes but did not specify the exact figure. “I was both angry and also deeply saddened to see parliament, your parliament, our parliament desecrated in that way,” the New Zealand leader said.

At one point, multiple blazes were visible in the grounds of the parliament, including one at a public playground, with smoke and explosions rising from the fire. Protesters were reportedly throwing material on the fire to keep it burning. Ardern later confirmed the blaze had been extinguished by authorities. 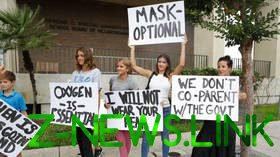 “In the last week, we have seen a changing mix in the makeup of the crowd, in particular we have become concerned that those with good intentions have become outnumbered by those with a willingness to use violence to affect their means,” police commissioner Andrew Coster said ahead of the clashes.

Police moved in to clear the demonstrators as the protest entered its 23rd day on the parliamentary grounds, where activists have been objecting to the imposition of a temporary vaccine mandate by the government on some elements of the workforce.

The protest sprung up in the wake of global demonstrations against vaccine mandates, including, most notably, the ‘Freedom Convoy’ truckers who had blockaded areas near Canada’s parliament to oppose requirements affecting workers moving back and forth between Canada and the US.