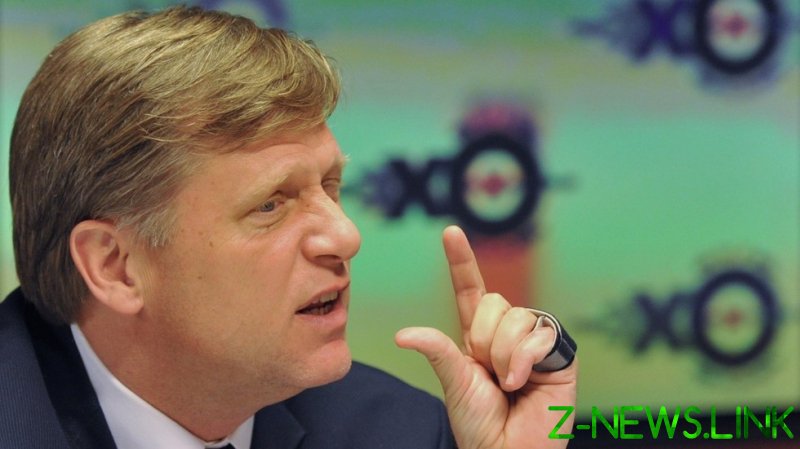 On Sunday, an anonymous Twitter user posted an exchange with the ubiquitous anti-Moscow activist, who teaches international studies at Stanford University and writes a column for the Washington Post when he’s not to television peddling conspiracy theories. Asked whether he would be concerned about being granted a visa to visit Russia again, the former advisor to US President George W. Bush said that he was more than comfortable commenting on the country from afar.

“I have a job for life at the best university in the world,” he said. “I live in a giant house in paradise. I make close to a million dollars a year. I have adoring fans on TV and a half million followers on Twitter, 99% who also admire me. I’m doing just fine without a damn visa from Russia.”

In reply, the Twitter user shot back that “all of that perfectly exemplifies the fact that American meritocracy is just a myth.” For the riposte, the account was reportedly blocked by the ex-diplomat.

In a subsequent Tweet posted late Sunday night, McFaul confirmed the exchange was real, saying “I wrote that message in a private channel. I did not expect it to be published.” However, he went on, “it was still a mistake. It was arrogant and idiotic.” According to him, “a swarm of Russian trolls was accusing me of failure, and I responded in a most unprofessional way.”

Despite claiming to be targeted primarily by shadowy Russians online, McFaul has drawn no end of criticism from fellow Western commentators and analysts who see his approach to the country as out of touch with its reality. Journalist Glenn Greenwald said McFaul was assuming the user was “a Kremlin agent unless he immediately provided his real name, but that probably goes without saying. Everyone is a Kremlin agent to these elite conspiratorial loons.”

McFaul served as US ambassador to Moscow for two years, leaving the post as the Ukraine crisis boiled over, in 2014. His time in the Russian capital was controversial, with many establishment figures believing the accidental diplomat was meddling in the country’s domestic political affairs. In a 2012 interview with the website Slon, McFaul described himself as “specialist on democracy, anti-dictator movements, revolutions.” Furthermore, he had written a 2005 paper on “American Efforts at Promoting Regime Change in the Soviet Union and then Russia.”

After his return to the US, McFaul became a vocal critic of the Russian government, primarily through his Twitter account. This led to appearances on American cable television shows, and op-ed space in mainstream newspapers. If his claim of a close to one-million-dollar annual income is true, it appears he has fabulously monetised this “sideline.”

The professor’s real fame kicked off when he positioned himself as perhaps the loudest proponent of the conspiracy theory that became known as ‘Russiagate’. McFaul helped feed paranoia among those aligned to the Democratic Party about supposed Russian meddling, with his former diplomatic status adding heft to the fake allegations – claiming, for example, that “Russia attacked us” and pushing fantastical, partisan, and often outright delusional, talking points.

This led to a punditry gig at MSNBC, where he helped feed the Russiagate narrative, often with Rachel Maddow. The style was more “news entertainment” than what would be considered journalism in most of the civilized world.

McFaul’s carry on raised eyebrows in Moscow, where many wondered how a man with considerable genuine expertise on Russia ended up going down such a path.

A view often expressed to this writer by academic and political Russians (many of them opposition-minded) was that the tragedy of the former ambassador is that he could have used his status to work towards improving perceptions of Russia (and Russians as a people) in the US, but instead he chose to promote xenophobia and cash in on a conspiracy theory he knew was completely false.

Just last night, a close Kremlin advisor privately messaged to say “we always knew that he was fantastically stupid, but we didn’t realise it was to this extent,” after seeing the Twitter exchange.

Back in 2018, the Russian prosecutor general’s office announced it would be eager to speak with McFaul in connection with allegations made against Bill Browder, a former pro-Kremlin financier who has since led the charge on anti-Moscow sanctions. Browder, once a prominent supporter of Vladimir Putin, turned against Moscow after being accused of evading $40 million in taxes.

Former President Donald Trump, asked by his Russian counterpart, Vladimir Putin about the request, described it as “an interesting idea.” American lawmakers later voted against the idea of making former diplomats available for interrogation.

While the think tank racket, and American cable news, provide healthy stipends to those whose analysis of the world neatly fits with the goals of embedded US foreign policy, and McFaul’s California pad may well be plush, at least one of his claims may not be demonstrably accurate. A Twitter Audit report, while far from the most scientific of techniques, claims that almost 40% of the esteemed professor’s followers are fake accounts.

Whether this apparent shadow army of bot accounts has been provided by the Kremlin in an effort to elevate McFaul’s hot takes about the country, or paid for by the former ambassador himself, is unclear.