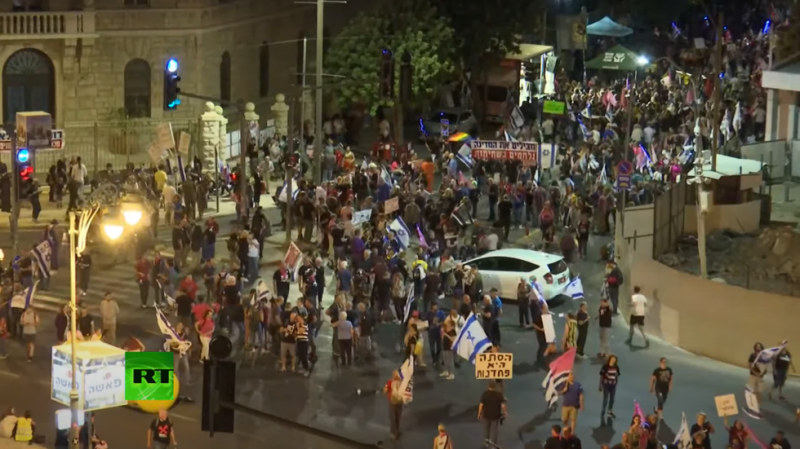 Some 2,000 people marched through Jerusalem to rally and cheer outside PM’s residence on Saturday in a victory lap in their anti-Netanyahu crusade. Over the past year, protests in Israel have been taking place on a near-weekly basis, sometimes in breach of coronavirus restrictions on mass gatherings, and often ending with arrests and scuffles with police.

“After spending this year of blood, sweat, and tears, going out in the streets, not knowing if this will change anything… We can definitely allow us to celebrate right now,” one of the protesters, Or Biron, told RT’s Ruptly.

“The protest is the main cause that Netanyahu government collapsed and now we are going to have tomorrow a new government, and yes, the chances are 99 percent,” said Mossi Raz, a member of the Knesset for the left-wing social-democratic Meretz party.

After 12 years in power, Netanyahu is set to be replaced by a “change” coalition government, led by former aide Naftali Bennett and opposition politician Yair Lapid, with support of an Arab religious party.

And while there is no absolute certainty yet, the protesters feel that the victory is almost “in their pocket.”

“We need to see tomorrow what is going on, but we can have a true, consistent hope that tomorrow we’ll have a different Israel here, or at least a chance for a brighter, better Israel,” said a Pink Front protester, Yaniv Segal.

If Lapid and Bennett’s razor-thin coalition gets approved by the Knesset on Sunday, it will hold off the need for yet another general election. Israel has held four over the past two years, repeatedly failing to deliver a majority government.

“This is a time to celebrate,” Mossi Raz added. “Tomorrow night we’ll be sure and then after a few minutes of celebration we have to start working and we have to start the work for equality, against corruption, for health, education and climate change.”

Netanyahu tried to block the new coalition on a technicality, but was overruled by President Rivlin, who himself will step down on July 9, when his term ends to be replaced on his ceremonial post by former Labor party head Isaac Herzog.

In Israel’s 120-seat Knesset, Bennett-Lapid coalition has a razor-thin majority of 61 seats, and even a single detractor can derail their plans.