Anti-lockdown Tennessee pastor tells mask-wearers they are not welcome: ‘I’m not playing these Democrat games’ 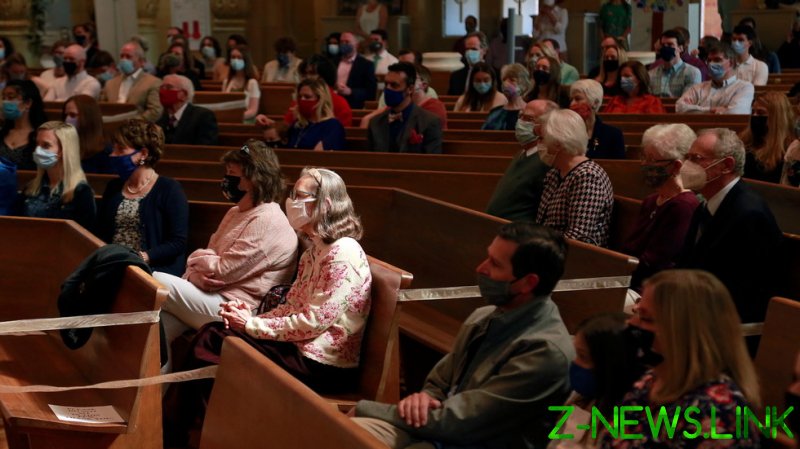 Addressing his congregation on Sunday, the controversial pastor said he was against counties reimposing mask mandates to curb a rise in coronavirus cases. If Mount Juliet, Tennessee, where the Global Vision Bible Church is located, goes through the same regression in policy, pastor Greg Locke claimed he would not be following the reinstated guidance.

“If they go through round two and you start showing up (with) all these masks and all this nonsense, I will ask you to leave,” Locke said to a round of cheers from his congregation. “I will ask you to leave. I am not playing these Democrat games up in this church. If you want social distance, go to the First Baptist Church, but don’t go to this one,” the pastor added, as the congregation gathered in a giant tent erupted in applause.

In a service that was broadcast live on Facebook, Locke went on to criticize fellow pastors for refusing to do services like baptisms out of fear of the virus and its quickly spreading Delta variant.

“I ain’t playing these stupid games,” he said. “A bunch of pastors talking about how much they want to see people heal and they’re afraid to baptize people because of a Delta variant – I’m sick of it.”

Locke said he has no plans on closing even if ordered to.

“They will be serving Frosty’s in hell before we shut this place down,” he promised.

Locke gained national attention last year during Tennessee’s lockdown when he continued holding in-person services while most other churches turned to remote alternatives.

His anti-mask mandate has predictably caused a stir with liberal-leaning users on social media. Some predicted that Locke and his supporters would inevitably catch Covid-19, with one commentator going as far as suggesting that the pastor would die from the virus.

The current guidance from the Centers for Disease Control and Prevention states that fully vaccinated individuals do not need to social distance or wear masks in most public spaces. With growing concern among health officials about rising cases and slowing vaccination rates, however, the mask guidance could change. White House medical advisor Dr. Anthony Fauci revealed on Sunday that there are active discussions taking place at the CDC about reverting back to a universal masking recommendation.

Locke has also been a critic of Covid-19 vaccinations, urging his followers not to trust them, even claiming “political elites” are lying about getting inoculated.

“If you think for one minute that those political elites actually got the vaccination, you are smoking meth in your mamma’s basement,” Locke said in May. “Bunch of fake liars is what they are. They didn’t shoot nothing in their arm but a bunch of sugar water.”