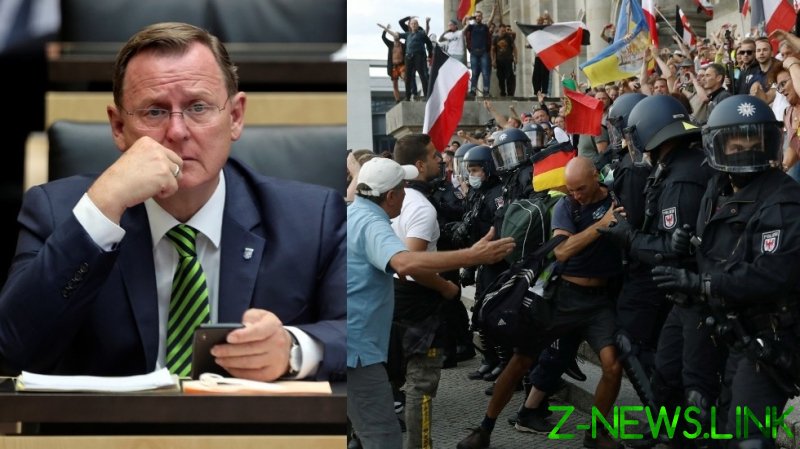 The massive demonstrations against Berlin’s tightening pandemic control measures are starting to resemble “terrorism,” Ramelow told Tagesspiegel on Thursday, insisting the protests – and the fringe interests they brought together – were “a threat to internal security in our country.”

Ramelow, who is a member of The Left (Die Linke), pointed to a protest in which some marchers carried large photos showing Chancellor Angela Merkel and virologist Dr. Christian Drosten in concentration camp uniforms and chanted for them to be hung from lampposts as evidence the opposition to Merkel’s coronavirus regime was getting out of control.

Especially dangerous has been the way in which the demonstrations bring together far-right “Reichsburgers” (a fringe group of German monarchists) with “lateral thinkers” (Querdenken, a reference to a free-thinker group that has organized numerous protests against lockdowns) and “corona-deniers” with “anti-vaccination activists,” Ramelow continued.

The volatile mixture, he said, was “very dangerous.” He dismissed the notion that Germans would be vaccinated against their will and seemed disturbed that anyone would even consider the idea that Microsoft founder and billionaire vaccine evangelist Bill Gates was “now trying to force-vaccinate us.”

In the interview, Ramelow attempted to link last weekend’s arson attack on the Robert Koch Institute, Germany’s federal disease control agency, to the anti-lockdown movement. However, the attackers – who were seen by security guards throwing molotov cocktails at the facility – have not been caught and no evidence has been produced to indicate a political motive. The facility was reportedly targeted with a distributed denial of service (DDoS) attack by hackers several days before the firebombing.

The leftist politician also sought to link the anti-lockdown protesters to a bizarre act of vandalism earlier this month on Berlin’s Museum Island, a crime German media strove to pin on conspiracy theorists and the QAnon movement. Dozens of artworks and artifacts, including a reconstruction of an ancient Greek Pergamon altar, were defaced with an unknown “oily substance.”

Ramelow claimed the beliefs of the anti-lockdown protesters were part of an insidious undercurrent of “irrationalism” which was responsible for wild stories about the island.

“They say the Pergamon Altar is the Witches’ Sabbath,” the politician pointed out. Indeed, “they” say much more than that – former vegan celebrity chef Attila Hildmann has claimed that the altar is actually the nexus of the “global satanism scene,” even accusing Chancellor Angela Merkel of performing “human sacrifices” on it with her globalist pals. It is unclear how all this is related to the anti-lockdown protests, however.

German officials have sought to label anti-lockdown protesters as security threats before, in particular after the August incident in which a small faction of protesters marching in Berlin leaped over metal barricades and evaded riot police to “storm” the Reichstag building. To add to the political outrage that followed, some of the intruders were brandishing the imperial German flag popular with the Reichsburgers.

While the splinter group received the lion’s share of media attention, including grandstanding denunciations from Merkel’s Christian Democratic Union and its political allies, this happened during a much larger demonstration. Tens of thousands more protesters massed near the Brandenburg Gate to show their opposition to the strict controls placed on Germans amid the pandemic, and mass protests mostly went without incident.

While Merkel pledged late last month not to enact a second economy-destroying nationwide lockdown, her government has steadily been applying more pressure as cases creep up. A partial lockdown is set to take effect next week, with restaurants, theaters, gyms, and swimming pools closing and private gatherings limited to 10 people. Schools will remain open.

Berlin has pointed to a steep uptick in Covid-19 cases to justify the crackdown, even though the rise has not been accompanied by a surge in deaths as happened during the initial wave of cases. A Bavarian testing lab was found to be churning out a stream of false positives earlier this week, with 58 of 60 tests wrongly diagnosed as infected. Economic Minister Peter Altmaier downplayed the issue, suggesting it was only a problem at that one facility.