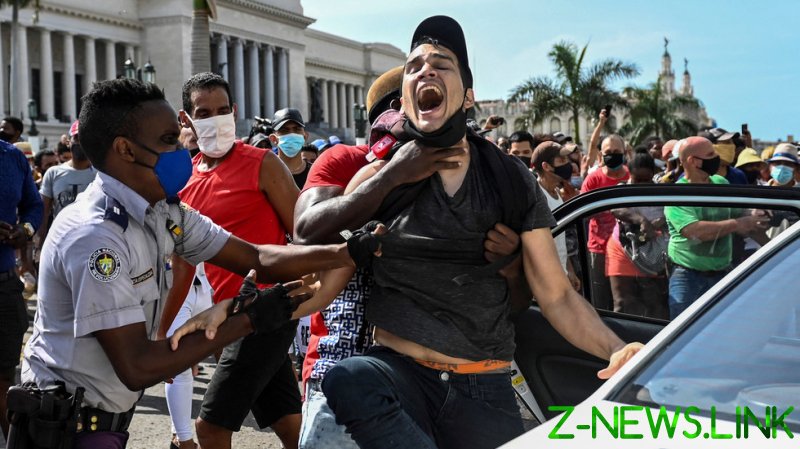 There are widespread reports of anti-government protests in Cuba. Aggravated by Covid-19 and the country’s struggling economic situation, some people took to the streets calling for an end to the island’s communist regime.  This has, unsurprisingly, provoked an outpouring of support from the western mainstream media and all the usual suspects in the US, not least from the foaming anti-communist Cuban diaspora in Miami, perfectly encapsulated by the likes of Marco Rubio, the Republican senator.

It would surprise few that in coverage of these protests, we’re seeing all the usual rhetoric, the stellar claim that the “people of Cuba want democracy and freedom” etc. Of course, the authorities in Havana have immediately blamed the United States and the CIA for fomenting the situation, and promoting a “colour revolution”.

In all fairness, we’re yet to see any evidence of that, but on the other hand one would be completely foolish in ignoring the long history of US political coercion and interference towards the island. Washington has had it in for the socialist state since the day it came into existence in 1959.

Those who detest the regime in Cuba point to its impoverished economic situation, of course, to justify their position, arguing the commonly held narrative that “socialism doesn’t work, that’s why they are poor.” But is this not more illustrative of a bigger and more obvious truth? That the United States is more responsible for the economic catastrophe in Cuba than the authorities within that country, through its brutal 60-year long embargo against it that has blocked trade and investment. Recently, the Trump administration purposefully tightened the noose with its opportunistic rendering of Havana as a “state sponsor of terrorism” – and Joe Biden has shown no interest in changing this policy.

Let’s consider a couple of questions: Why does the United States political class have it in for Cuba so much? Is Washington really motivated by benevolence and altruism and a desire to extinguish a brutal authoritarian state? Mike Pompeo once called Cuba a “threat to the world” on Twitter, but this is plainly ridiculous.

The real reason, which also ties into the ideological dynamic, is inherently geopolitical: it’s a Communist regime sitting on America’s doorstep. The US approach towards Cuba stems from a foreign policy logic known as the “Monroe Doctrine” – whereby the US sees it as a necessity, to uphold its own sense of security, to maintain complete political dominance in the western hemisphere at all costs.

In a nutshell, no regime or state which is different or diametrically opposed to US interests within the Americas is allowed to exist, or at the least, succeed. Since the 19th century this has translated into a set of foreign policy actions which have sought to crush, curtail or influence such countries at all costs.

This has been achieved through a variety of means, including outright invasion (Haiti, Panama, Grenada), military coups (Chile, Costa Rica), promulgation of civil war (El Salvador) or crushing sanctions (Venezuela) and since the Cuban revolution and rise of the Castros, Havana has been in the firing line.

Over the span of 60 years or so, the United States has pursued a number of brutal policies to try and end or curtail the regime. This has included a reported 634 assassination attempts against Fidel Castro by the CIA, the botched Bay of Bigs invasion in 1961, and the signature US trade embargo and other sanctions, which have been repeatedly condemned by international bodies. America’s obsession with all out-regime change in Cuba led the island to look for support from the Soviet Union, which led to the Cuban missile crisis of 1962.

The cold war is long over, but the US obsession with Cuba is not. While the Obama administration was pragmatic enough to end this legacy by normalizing relations with Havana, the Trump administration quickly reversed it, motivated by a mix of neo-Monroe hegemonic politics, neo-Conservative fanaticism and supporting the Miami anti-communist Cuban lobby.

It decided to tighten the sanctions noose, severely limiting assistance to the country, while the Treasury department restricted the passage of remittances back into the country (amounting to $3 billion per annum), forcing Western Union to close 407 outlets. In addition, the presidency limited trips to the country and restricted imports of a number of Cuban products.

The impact of Covid has left the country suffering deeply, adding to the weight of these sanctions, and triggering the unrest. While the western mainstream media narrative has focused on these, there have also been demonstrations in support of the revolution, but these have been ignored.

As a whole, Cuba isn’t a failure; it is a country that, despite being subjected to endless and overwhelming US pressure, has otherwise held itself up well. Rather than making misleading arguments about the “failure of socialism”, we have to look at the bigger picture of the bully boy superpower Cuba sits right next to, and its determination to undermine the island every step of the way.