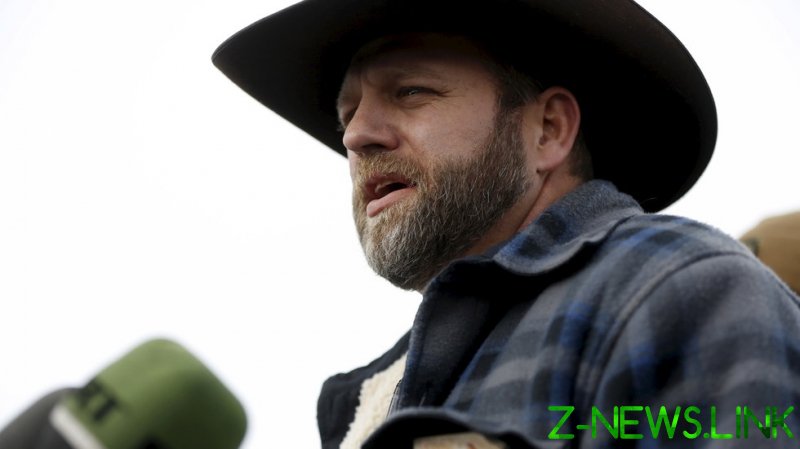 Bundy filed paperwork earlier this month to run for governor of the Gem State, and officially announced his candidacy on Saturday. In his first campaign video, he promised to fight back against “Joe Biden and those in the Deep State that control him,” accusing the Democrat president of plotting to “take away our gun rights, freedom of religion, parental rights, and more – and further violate the Constitution in unimaginable ways – even more than they’ve already done.”

“We can not afford to have state leadership that lets the federal government bully us, or walk all over us,” he added.

Bundy’s antipathy toward the federal government is long-running, and has made him a folk hero to militias and states’ rights groups in the American west. He shot to fame in 2014 when, together with his father Cliven Bundy, he engaged in an armed standoff with Bureau of Land Management (BLM) agents at their family ranch in Bunkerville, Nevada. The BLM, attempting to confiscate Bundy’s cattle for allegedly grazing on federal land, were met by hundreds of militia protesters, and retreated.

Two years later, Bundy traveled north to Oregon and occupied the headquarters area of the Malheur National Wildlife Refuge, after ranchers Dwight and Steve Hammond were sentenced to jail time for alleged arson on federal land. Bundy and a group of armed militants holed up in the refuge for more than a month, before he and his brother Ryan were arrested, and an accomplice, Robert LaVoy Finicum, was shot dead by FBI agents.

Bundy lives in Emmett, Idaho, and has continued his anti-government activism in the years since his public showdowns. He has been arrested five times since last March for participating in anti-lockdown protests at the Idaho State Capitol in Boise.

While his exploits may have made him a hero to some on the right, the Iowa Republican Party publicly rebuked Bundy after he filed the paperwork to enter the gubernatorial race earlier this month. “We do not support his antics or his chaotic political theater,” Idaho Republican Party chairman Tom Luna wrote in a statement. “Republicans are the party of law and order, and Ammon Bundy is not suited to call himself an Idaho Republican, let alone run for Governor of our great state.”

Bundy’s views are somewhat out of step with both mainstream Republicans and the Donald Trump-supporting ‘MAGA’ brigade. He has spoken out against Trump’s hardline anti-immigration policies, and even in favor of a different ‘BLM’ – the ‘Black Lives Matter’ movement. Finding common ground with BLM over their shared distaste for law enforcement, Bundy said last year that he supported defunding the police and “government in general.”

His 2022 platform promises an end to income and property tax, the return of all federal land in Idaho to the state, criminal justice reform, and an “executive order to end abortions.”