Antediluvian technique of the Soviet youth 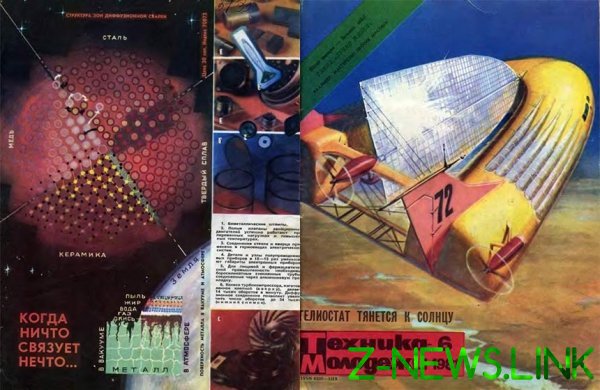 Any Soviet magazine, if you know how to read between the lines, represents a valuable testimony of a real, not lacquered Soviet life. Since I fell into the hands of No. 6 of 1981 of the magazine “technology of youth”, one of the articles in which I studied under a microscope (https://germanych.livejournal.com/360170.html), then read some more materials in this room. Well, let’s say, a small note “for Homemade… two generations” in “a Time to search and wonder.” Here it is. 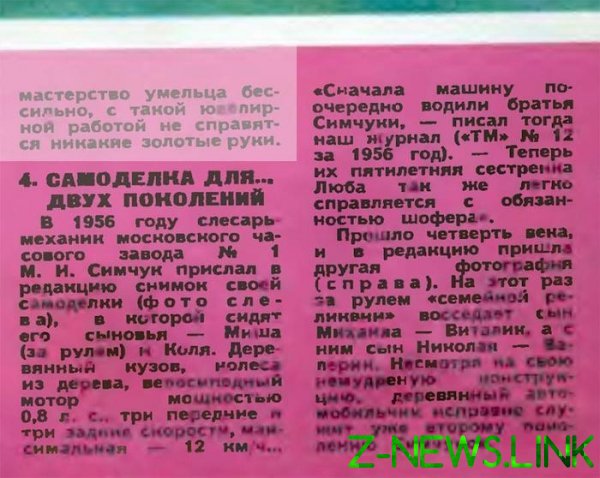 As is clear from the notes, in 1956 a mechanic Moscow watch factory No. 1 M. I. simcock made for his infant offspring wooden baby car. The car was powered by a small motor and can reach speeds of up to 12 km/hour. The story of this wonderful car appeared in one of the rooms of TM in 1956. Here is the article from a magazine in 1956. 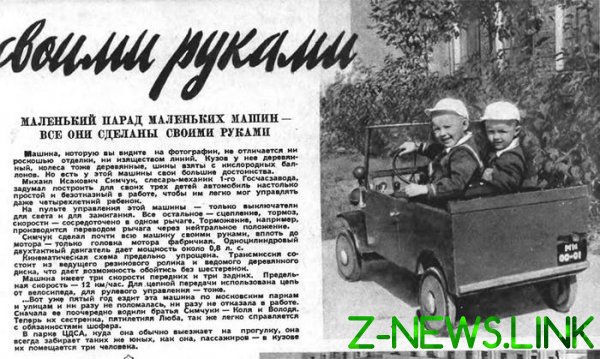 And after a quarter century in the journal “technology towards the youth” came another picture, which in this car ride for the grandchildren of the M. I. semcuka – children of his children. A Soviet family idyll. That confirms the picture of number 6 for 1981. Here this: 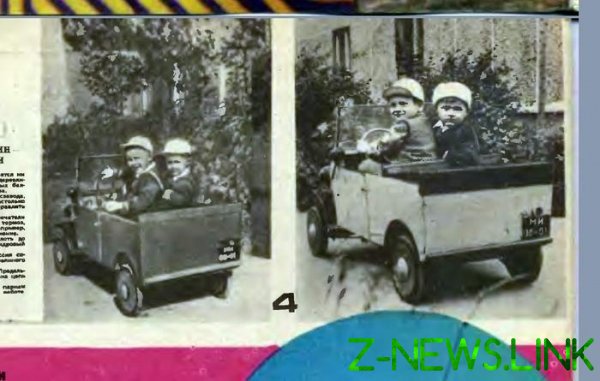 What can I say? The photo in the magazine is just terrible quality, what for popular science magazine, a disaster. But in General, abstracting from the awful Soviet mass printing, you can say one thing: honor and glory Soviet Kulibina – Mikhail Isakovich to Simuku. If you believe the article in 1956, it even the engine is almost completely self made (except for the factory head motor). Well done.

After reading this article I sadly remembered his earlier childhood, and what a fight in kindergarten, we organized for the right to drive in a normal Soviet child foot single machine. And there is such a luxury – triple, though wooden, but with his motor car. Sure, all Soviet children, who saw it first hand, was drooling with envy. And in 1956 allowed, and in 1981 too, for sure, allowed. Because although it is a wooden product and may not look like much, but itself goes. And in the USSR for children anything even remotely similar industry produced. And even the fact that this homemade car yuzalsya in a family of Semchukov a quarter of a century, handed down, so to speak. By inheritance from father to son, tells us what a treasure it was for family. By Soviet standards – and really treasure. And that is just very sad.

Because in essence – this is a very miserable hack, in fact a wooden trough, which for 1956 looks here and there, but in 1981 – it’s just a scrap. And her family throws, saves, judging by the photos regularly wears. For even such a miserable miserable toy – for Soviet children, in fact just a piece of incredible luxury. And doubly sad that the scientific-popular journal “technology youth” published an article about the fact that a quarter of a century later, people are forced to exploit this clunker. Because in the Soviet stores do better than this wooden car is still not to buy. That’s really really – “a Time to search and wonder.”

That is, in fact, it is again the story about how living in Polynesia Soviet people managed somehow with his own hands a little bit to brighten up their lives in the framework of the dreary Soviet reality. And that I did not wonder where the mechanic M. I. simcock took the materials for his convertible, and how long it was built for. It is not excluded that in order to build this unit, simcala took about a year. And not because he could not hands to work, but because the materials in the USSR was full of seams.

Flashed in my head these thoughts after reading this article, and then I thought: I wonder what kind of toys offered by American hygroscopically industry American children at the time when the grandchildren of M. I. semcuka rode antediluvian freak? I looked a bit on the Internet and different directories below the share found. Naturally, fans of the Soviet olden time, who believe that the USSR was the most advanced nation in the world, watch these images is not recommended.

For starters here’s a reversal. 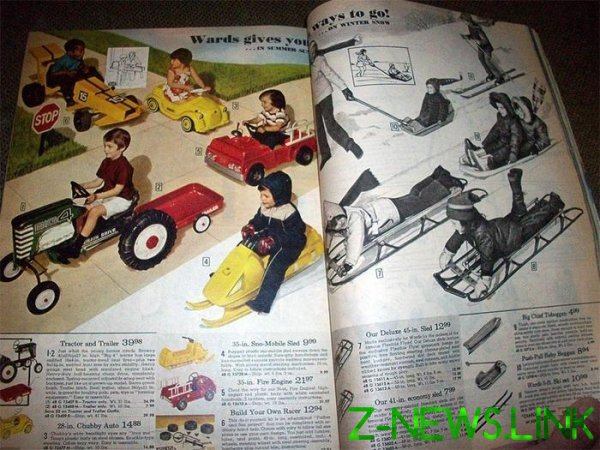 This is taken from catalog Montgomery Wards Christmas Catalog in 1974. Montgomery Ward is an American company that existed from 1872 to 2001 and involved including retail sale of goods through catalogs. Since 1872 this was done, by the way.

Here’s the cover of this particular catalog for 1974. 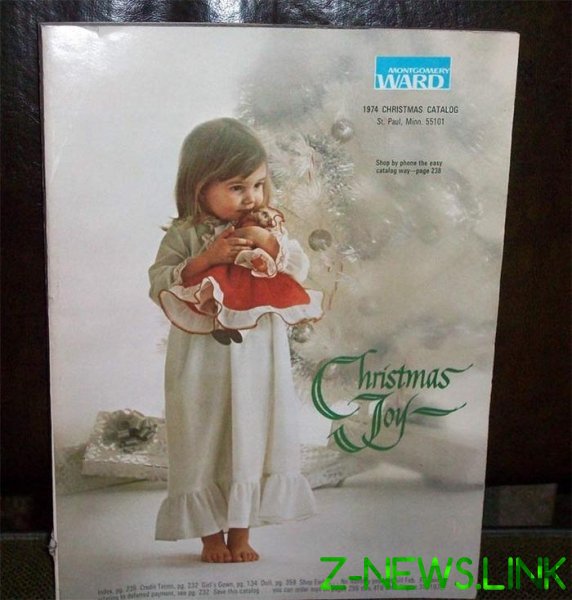 On the spread above shows different devices for children used the subject to explore the yard. For every taste and color you Want to take a tractor and want a racing car.

For those who are older, that’s such a wonderful high. 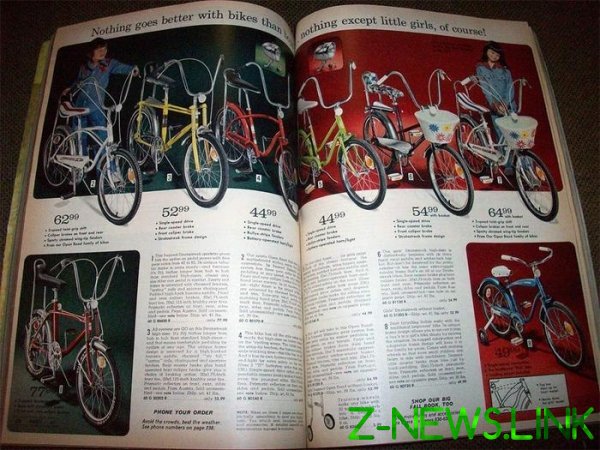 This, too, from the catalog for 1974. Everyone can remember what bikes were in the USSR at the time.

For those who do not want to drive on the streets, here are suggestions. 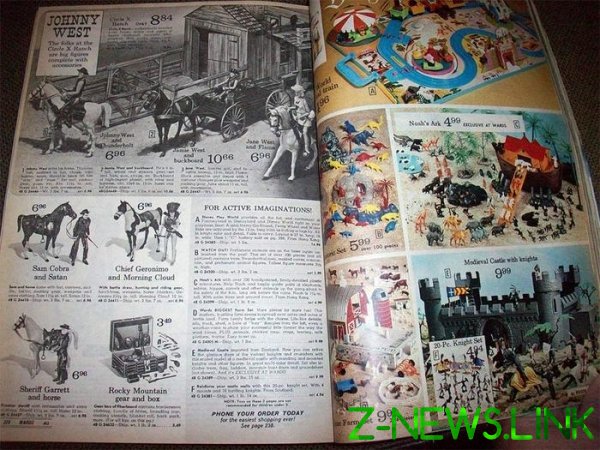 Well, in 1974 I have not seen this or a similar catalogue of Western toys. Because the better that at that time offered for boys Soviet house of toys, looked like this: 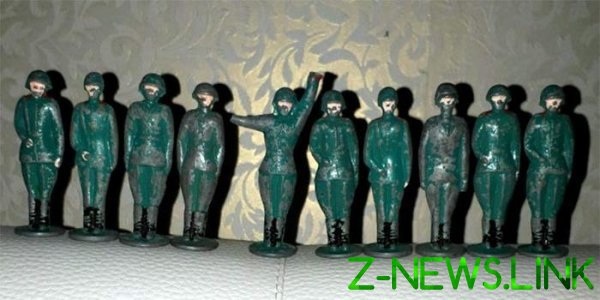 Well, except that the original paint was not peeling.

But killed me in this catalog 1974 this turn: 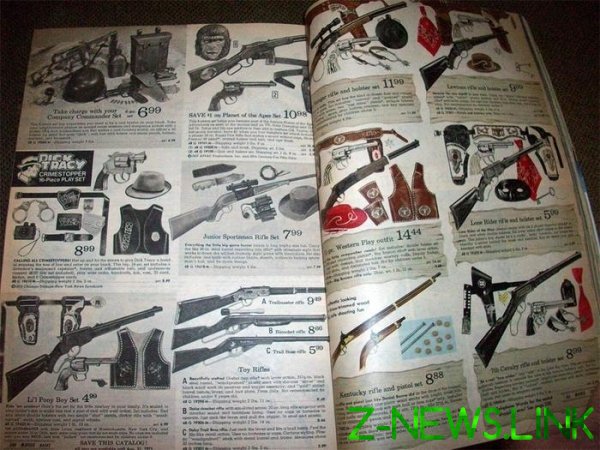 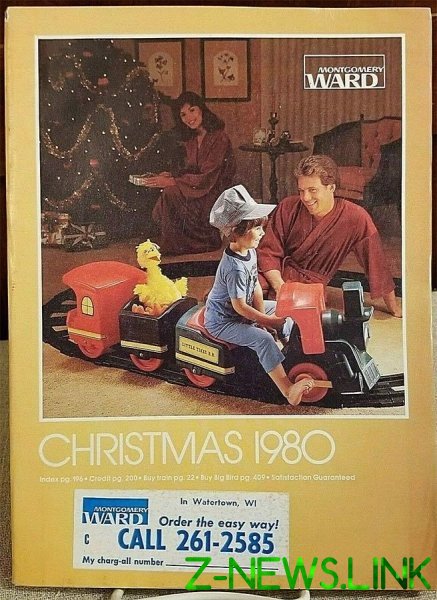 On the cover pedal engine and plastmassovaja canvas for home, for family – certainly for the younger members of the family. Children’s personal machines I have not found. Most likely they were catalog very thick – but among the scanned pages uploaded to the network, they were not. So just let loose a few pages, a few of which would be lost, appetite and the dream of any Soviet child in 1981.

On the left is for lovers of winter sports. Right – for those who like to play war games. 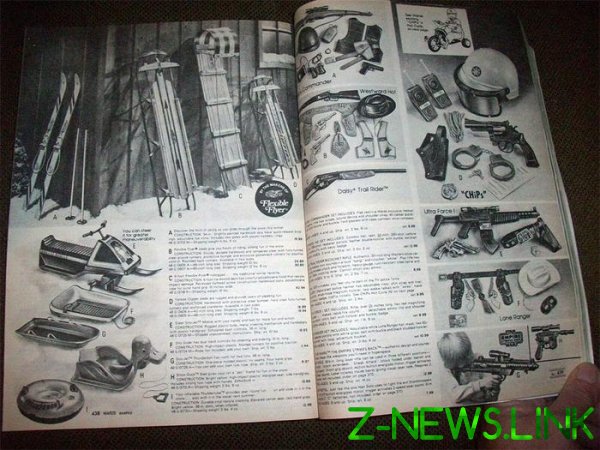 And for young music fans and show off, who want to play rock musicians 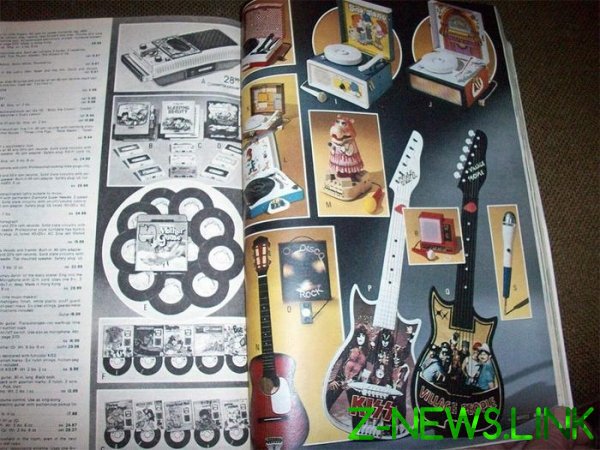 And for those who got stuck for “Star wars.” 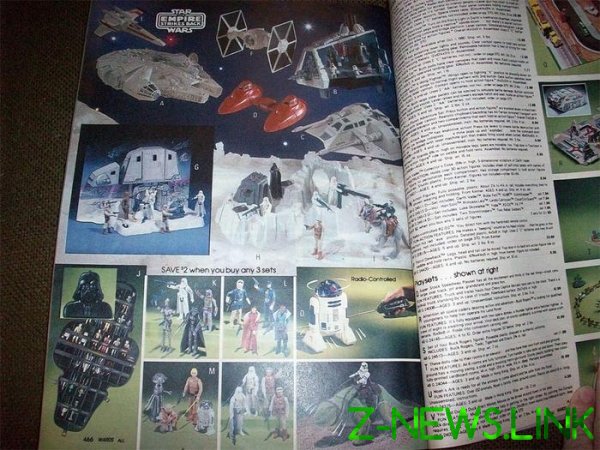 This, of course, for girls. 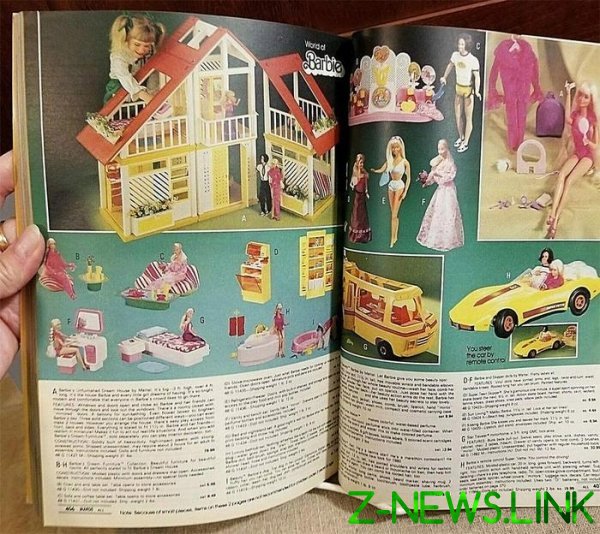 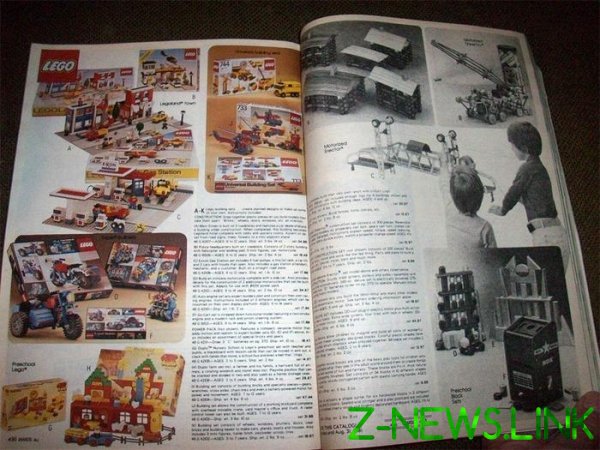 And of course in 1981, already a lot of electronic toys. 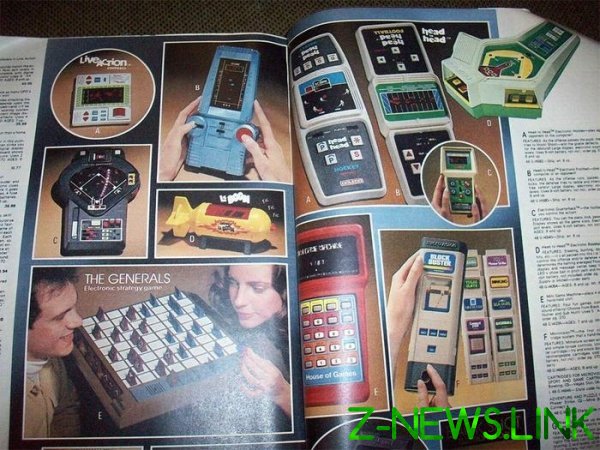 But there is always a choice. 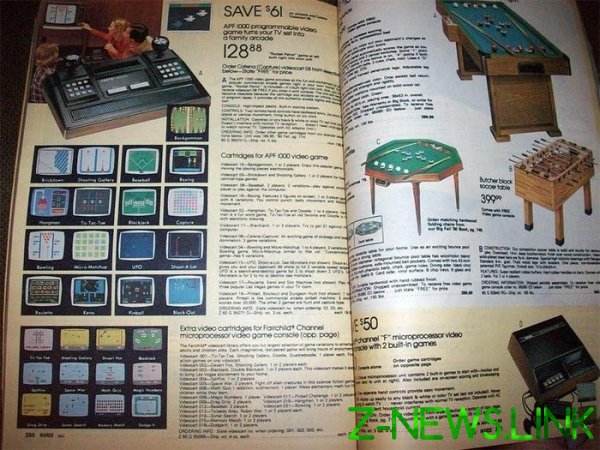 I want to play computer games through the Xbox? No question. Want to have a pool – and it’s achievable.

And if it is necessary to play in “mothers and Daughters”…. 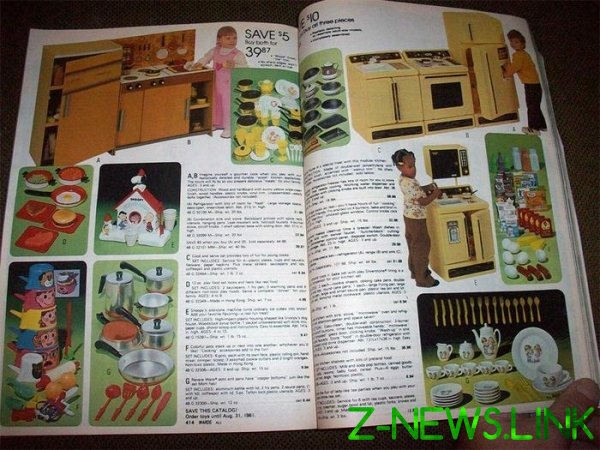 …all features, including a toy stove, a washing machine and generally the whole kitchen is in full growth. Play – do not want. And all the beautiful, bright colors and not dull seroburomalinovoy, as in the USSR. 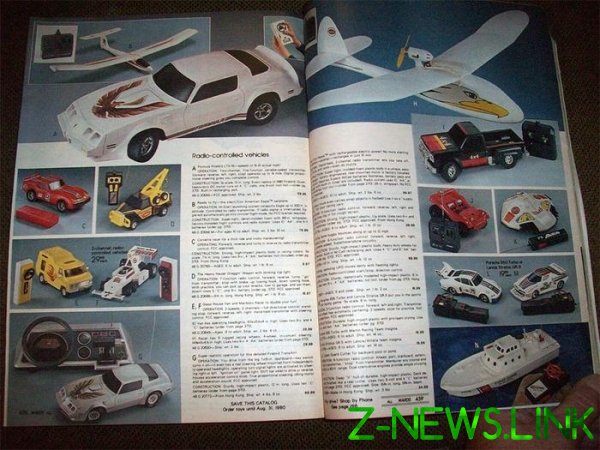 In General, there was plenty to choose from. What poligrafa directory!

And in the Soviet Union at this time grandchildren mechanic Moscow watch factory No. 1 M. I. Simchuk was struck by his peers and readers of TM that was rolling around the yard in a makeshift wooden cradle with a motor, made by their grandfather for a quarter of a century before.

Here such here thoughts arise in passing when flipping through old Soviet magazines, which tried to prove that the Soviet Union is the most advanced country in the world. If you do not have information for comparison – then Yes, looked like the most advanced (space, hockey, ballet and lots of tanks). But if fell into the hands of some directory, type Montgomery Wards Christmas Catalog in 1974, the whole illusion crumbled. And then it became clear that the Soviet Union – backward system, which is inflated like a Turkey, trying to prove his “peregovits”, and planting on half-starvation rations of its citizens in order to on TV to report about the next launch of another astronaut. In the vernacular it was called “no pants but wearing a hat”.