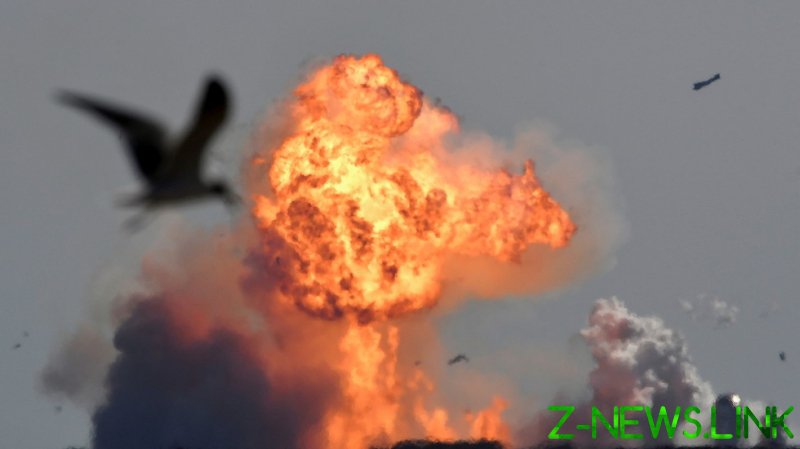 Starship prototype Serial Number 11 (or SN11) took off from a launch pad at SpaceX’s facility in Boca Chica, Texas on Tuesday despite thick fog in the area.

Raptor engines lifted the rocket to an altitude of 10 kilometers. SN11 then killed two of its engines one after another in order to descend, only firing them up again when close to the ground.

The plan was for SN11 to tip upright and safely touch down on the launch pad, but the test was cut short by a massive explosion.

The official SpaceX livestream froze, while the NASASpaceFlight broadcast captured debris falling from the sky onto the launch pad, and a loud bang.

“Starship 11 is not coming back. Don’t wait for the landing,” SpaceX livestream commentator John Insprucker said, adding that it was another “interesting flight” for the Starship.

Elon Musk didn’t seem too upset by the setback, joking on Twitter that “at least the crater is in the right place!”

SN11 now joins SN8, SN9, and SN10, which were also blown to pieces at the Boca Chica facility.

The Starship project is still a long way from its first manned flight, but SpaceX hopes it will eventually be able to deliver both people and cargo into orbit, as well as to the Moon and even Mars.

Musk is looking to create a fully reusable rocket which would only require refueling in orbit and short breaks between flights.