‘Another nail in the coffin of democracy’: Tulsi Gabbard slams Biden administration’s ‘crusade’ against Julian Assange 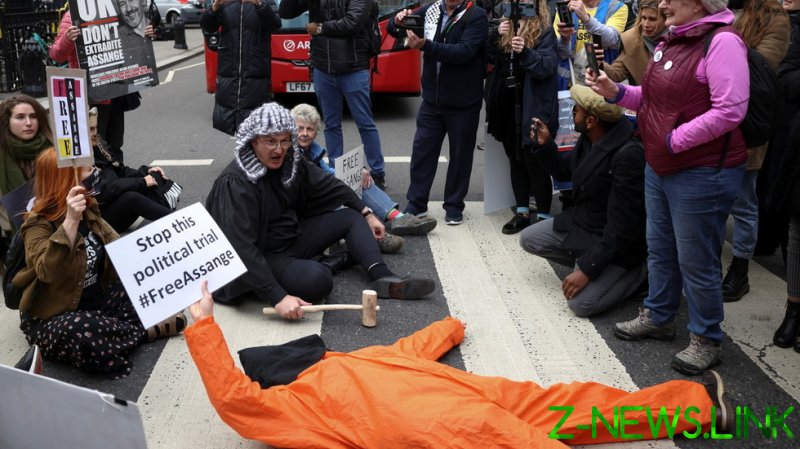 “If they succeed in [extraditing Assange], this will be yet another nail in the coffin of democracy here in our country and around the world,” Gabbard warned in a video posted to social media on Thursday.

The Democratic representative slammed what she referred to as the “increasingly authoritarian Biden-Garland administration,” dodging any mention of Vice President Kamala Harris in favor of Attorney General Merrick Garland.

Gabbard’s dislike of the VP is well known and her debate-stage takedown of Harris’ controversial record as attorney general of California is pointed to by some as the moment the senator’s own presidential campaign went up in flames.

In its continued persecution of Assange, Gabbard declared, the Biden administration was “doubling down on its crusade against our constitutionally protected rights,” specifically those protected by the First Amendment: freedom of speech, freedom of assembly, and freedom of the press.

The clip came just a day after prosecutors issued a series of “binding” assurances aimed at defusing concerns over the WikiLeaks publisher’s mental health were he to end up in a US prison. Assange’s attorneys have said they fear he might commit suicide if extradited to the US, where he faces a sentence of up to 175 years in jail on charges related to obtaining and publishing classified government and military documents.

A group of civil-liberties campaigners co-signed a letter earlier this month urging Garland to drop the charges against Assange as the US’ efforts to extradite him continue. While UK judge Vanessa Baraitser ruled in January that the publisher could not be extradited due to concerns regarding his mental health, Washington on Wednesday put forth a number of conditions apparently aimed at assuaging such concerns.

Assange would receive “any clinical and psychological treatment” recommended by prison doctors and would not be sent to the US “super-max” prison ADX Florence, nor would he be sentenced to a restrictive form of solitary confinement unless he committed a “further offense” – a nebulously defined qualification that has raised eyebrows among his supporters. Additionally, he could apply to serve his sentence in his native Australia rather than in the US.

However, Assange’s lawyer, Edward Fitzgerald QC, dismissed the conditions as “caveated, vague, or simply ineffective,” including the offer to serve his sentence in Australia, which has not consented to housing him.

Amnesty International also blasted the so-called assurances as “not worth the paper they’re written on,” saying they were not, in fact, legally binding.

The WikiLeaks co-founder has been locked up at Belmarsh Prison since April 2019, after he was dragged out of London’s Ecuadorian Embassy by police. He had been granted asylum by former president Rafael Correa in 2012, only for Correa’s successor Lenín Moreno to permit British law enforcement agents to enter the diplomatic mission to arrest Assange on arguably defunct charges of bail-jumping.

Gabbard’s condemnation of the Biden administration over its continuation of its predecessor’s pursuit of Assange was criticized by some, who recalled the Hawaii congresswoman’s endorsement of the Democrat for president during the 2020 election.