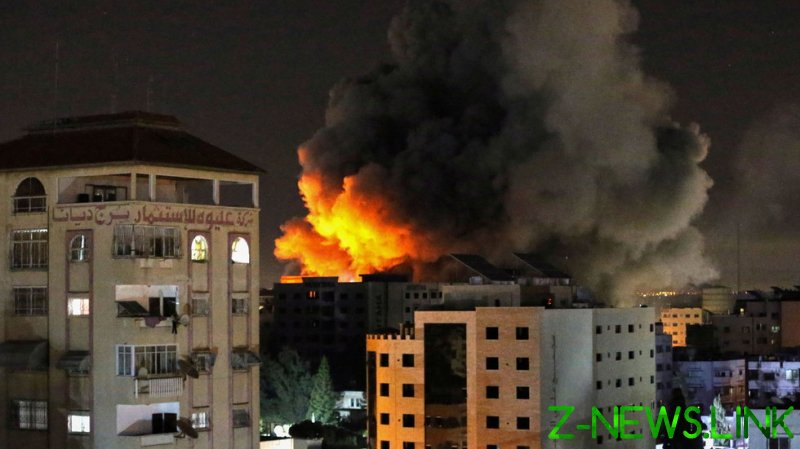 Footage from the embattled Palestinian enclave purported to show the al-Jawhara Tower as it took a direct hit by an Israeli war plane early on Wednesday morning, sending a massive column of smoke into the night sky. It is at least the second large structure in Gaza City severely damaged in recent air raids, with the Hanandi Tower, reportedly a residential complex, reduced to rubble on Tuesday night.

The Israeli Defense Forces (IDF) posted footage of an air strike on a high-rise soon after the initial videos began making the rounds, claiming the building included Hamas “intelligence headquarters” and an “information department.” It is unclear if the grainy IDF video depicts al-Jawhara or another structure, however.

While the al-Jawhara Tower appeared to sustain catastrophic damage in Wednesday morning’s strike, it is not the first time it was targeted by Tel Aviv, with Israeli warplanes bombing the same structure during fighting in 2014. At the time, the Committee to Protect Journalists noted the building housed both Palestinian media outlets as well as apartments.

The IDF also reported “non-stop” rocket fire into central and southern Israel, adding elsewhere that it is continuing strikes on “a number of significant terrorist targets and operatives in the Gaza Strip.” It said the strikes were waking Israeli residents, who scrambled to bomb shelters with their families for the night during the 3am offensive.

Other unconfirmed videos circulating online claimed to show a flurry of rockets launched from Gaza toward Tel Aviv, as well as the city’s Iron Dome air defenses intercepting many of the incoming projectiles.

The IDF also shared video of interceptions over southern Israel.

The tit-for-tat strikes come after more than a full day of fighting, seeing at least 30 Palestinians, including nine children, as well as three Israelis killed in the exchange. Violence spiked on Monday amid heated demonstrations over planned evictions for Palestinian residents of East Jerusalem, with Israeli police forcibly cracking down on the gatherings, injuring hundreds in the resulting clashes.

As anger over the evictions reached a boiling point and sparked unrest around the Al Aqsa mosque – the third holiest site in Islam – on Monday, Hamas began a barrage of rocket fire into Israeli territory, launching hundreds of projectiles and prompting a similar number of Israeli counter-strikes.

Hamas, a political party with a militarized wing, has governed the Gaza Strip since 2006, when it struck a major win over the Fatah Party. There has been no election in the blockaded territory since, with a race planned for May 22 postponed indefinitely by the Palestinian Authority amid ongoing disputes with Israeli authorities over whether Arab residents of Jerusalem would be permitted to cast ballots.