Home / WORLD / Another bonkers billionaire plans to save mankind, but this woke city of Telosa sounds more like a socialist hell than utopia 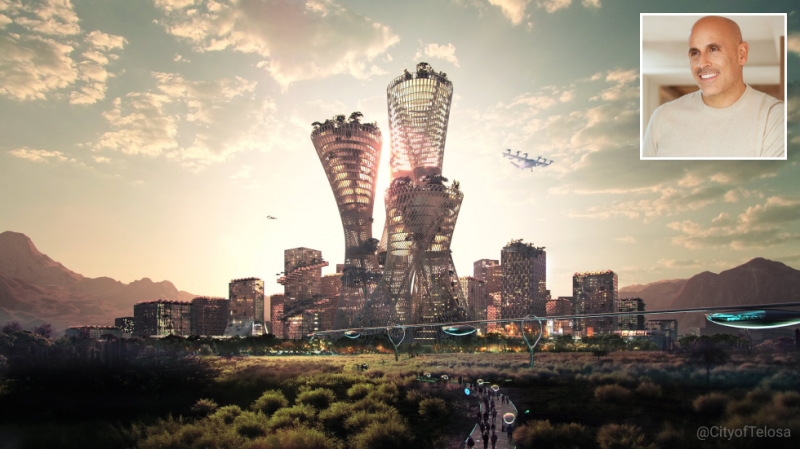 There’s nothing creepier than some oddball billionaire planning to build his own utopia where everything’s eco-perfect, life’s a breeze and everyone lives forever, like some ‘Stepford Wives’ meets ‘The Truman Show’ meets ‘Citizen Kane’ hell on Earth.

For the truly weird mega-wealthy nerds, like Jeff Bezos and Elon Musk, the dreams of civilisation as they imagine it stretch far beyond the boring blue planet we currently call home, with colonies of wealthy space-dwelling expats living the high life on Mars, while indentured AI robots mine red rocks and precious metals to send back to Earth to fund their lifestyles.

Elsewhere, however, there are dreamers whose ambitions might be more modest and worldly, but their egos are still definitely outsized. There’s Saudi Arabia’s leader, Mohammad bin Salman, who has hopes of starting work later this year on building Neom, a futuristic, high-tech city built in the arid northwest of his kingdom, full of pedestrian walkways, gardens, fountains and hi-tech wizardry. In the desert.

And now Marc Lore, the former Walmart executive and e-commerce billionaire from Diapers.com, has announced his scheme to build his ideal city of the future smack bang in the middle of Nowheresville, USA. The exact location, you see, is still to be confirmed although the new city does have a name – Telosa. Me neither (though apparently it derives from an ancient Greek word meaning ‘highest purpose’).

In a promotional video, Lore claims, “We are going to be the most open, the most fair and the most inclusive city in the world.” Sounds like woke hell. Or maybe Santa Barbara, California.

The Telosa website is like a progressive town planner’s wet dream, packed with references to sustainability, environmental impact and renewable resources, and full of words like open, fair and inclusive. When it uses up the daydreamer’s lexicon, it invents words like ‘equitism’ to explain the concept that everyone shares their stuff with everybody else.

Lore – lucky his name doesn’t end in a d – is super excited about his project, and sounds like a hyperactive child constructing its first Lego building as he breathlessly tells Bloomberg: “If you went into the desert where the land was worth nothing, or very little, and you created a foundation that owned the land, and people moved there and tax dollars built infrastructure and we built one of the greatest cities in the world, the foundation could be worth a trillion dollars! And if the foundation’s mission was to take the appreciation of the land and give it back to the citizens in the form of medicine, education, affordable housing, social services: Wow, that’s it!… ​​Let the people own the land! But in a capitalistic way!”

Yep, Telosa is gonna solve water scarcity, it’s gonna solve education problems, it’s gonna improve the lot of the working man and woman, make them rich, and it’s gonna make the world a safer place. This is starting to sound like an alternative system within a system, and a little bit unnerving. No wonder they’ve not yet selected a site for turning the first sod; I’m not sure any national or regional government will ever buy into this weirdness.

The more you read about Lore’s Telosa utopia, the more it sounds like some futuristic cult where “everyone is an important and valued member of the community and their voice should be heard, contributing to new possibilities.” This does not bode well, as it clearly discounts the inherent right to disagree that makes democracy the most popular system of government on the planet. It’s pie in the sky, pass the doobie, trippy-hippy gobbledygook, straight outta Frisco.

Stage one of the project is reported to be scheduled for completion by 2030, when it will accommodate 50,000 residents across roughly 1,500 acres at a cost of $25 billion and after that, the only way is up as projections estimate a population of five million living on 150,000 acres in 40 years. That might mean streets clogged with e-scooters and a long queue as you wait for your air taxi.

Lore, whose home now is apparently a $44-million apartment in New York, says the idea of building something from nothing is in his DNA and was first noticed when he was just four years old, when he told his grandma that he didn’t want to be a doctor or a lawyer. He wanted to be a farmer “because they grow stuff from nothing,” and that’s what he still loves to do – although his premise is simply false.

To grow something you need to start with a seed and farmers have to buy that seed, which does not come free and can be expensive. It’s hardly “nothing.” Of course, Lore knows that, but he’s selling a story here and he needs buy-in from future citizens if he’s ever going to break ground.

Lore follows in a long tradition of very rich businessmen – and yes, I’m pretty sure this sort of thing only involves men – planning such schemes. King Gillette, the 19th century entrepreneur behind the razor blade firm, wanted to set up a model metropolis in the vicinity of Niagara Falls which would obliterate the evils of commercial strife, eliminate crime and create a super-socialist community. Just what is it with slightly bonkers billionaires fantasising about building futuristic, woke cities to save mankind – is this the rich man’s equivalent of ordinary blokes sitting in their sheds plotting to take over the local parish council?

Gillette’s dream didn’t happen either. His legacy instead? A ruthless, cut-throat, profit-hungry corporation that rapaciously and audaciously comes up with over-hyped marketing wheezes to milk money from its customers. Way to go, rich folks!