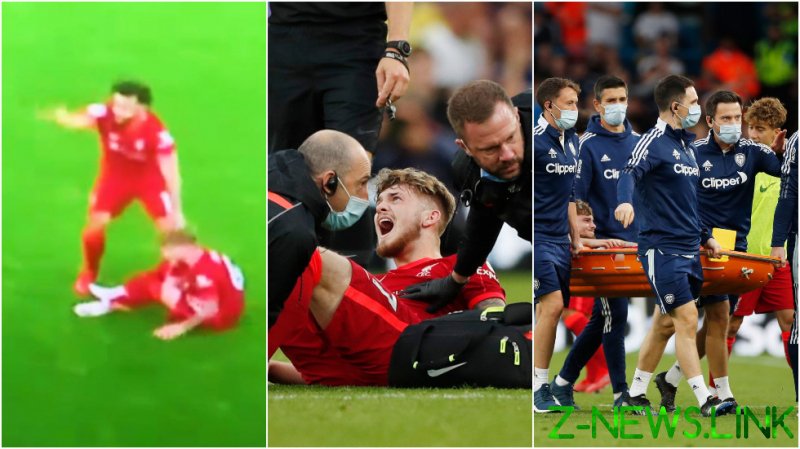 Livewire Elliott, who made his first Premier League start for the club less than three weeks ago, was chasing the ball on the flank near the technical areas when he was tackled by Leeds defender Pascal Struijk.

The hotly-tipped youngster’s leg bent at a horrendous angle as Elliott writhed in agony, with shocked Salah gesturing wildly to physios to race on and attend to the stricken star.

Manager Jurgen Klopp and the rest of the Reds’ coaching team surged forward to express their disgust at the gruesome incident, watching on as Elliott was taken away on a stretcher and Struijk received a 60th-minute red card for the challenge.

“It is a bad injury,” a pensive-looking Klopp confirmed to Sky Sports after his side’s 3-0 win at Elland Road.

“Ankle – I heard it was dislocated, we could put it back, he’s now in the hospital. We have to wait, obviously. He played an incredible game and is an incredible player. Now he’s out.

“Do I want such a young boy having this experience that early in his career? No. But it’s the case and now we are there and we will be there.

“We will wait for him as well because he’s a top, top, top player. I saw the situation immediately because I could see his foot was not in the right place. That’s why we were all shocked.”

Struijk appeared to share respectful words with Virgil van Dijk, the Liverpool lynchpin who recently returned from a nightmare injury of his own after spending nine months sidelined by a cruciate ligament injury.

“All our thoughts and prayers are going to Harvey,” the Netherlands defender later said. “Hopefully he recovers quickly and as well as possible from it. We have no idea what the diagnosis is at the moment but it looked bad.

“For the whole treatment period you are standing still and you hope for the best. Then you have to focus. We tried to deal with it in the best possible way.”

“Thank you for the messages, guys,” Elliott wrote on Instagram afterwards, sounding a determined note ahead of his recuperation. “Road to recovery.”

Former England midfielder Jamie Redknapp, who suffered injury problems during his time at Liverpool, voiced his sympathy for Elliott.

“I feel for him,” Redknapp told Sky Sports, taking a sharp intake of breath. “The recovery starts now. There are players who have come back from horrendous injury: I think about Andre Gomes at Everton, when his ankle [required surgery after a bad injury in 2019], people were questioning whether he would play again.

“Fingers crossed it’s a straightforward break, because there are some that are more complicated – you can be out for a lot longer. I broke my ankle a couple of times and came back.

“I feel so sorry for this young man because it’s the start of an incredible journey for him: he’s just got in the first team, he looks so at home in the Premier League – and no doubt he will do again.

“He’ll feel heartbroken today, as all Liverpool fans will, as his manager will, I’m sure. Every time you play football, every time you go in for a challenge, you are going to endanger someone.

“Having seen it – it’s not nice, I don’t recommend anyone to watch it. I feel, personally, it’s an innocuous challenge. He’s gone into the back of him. Does he mean to hurt him? No, of course he doesn’t.

“It’s just one of those that happens every now and again in football. I feel so sorry for this young man and I actually feel sorry for the player that’s involved, Struijk, because it’s a very difficult thing for a player.

“Players find it difficult to get over that sort of thing. It’s an awful situation all round.”

England and Manchester City striker Raheem Sterling echoed their sentiments, and UK football anchor and former Three Lions hotshot Gary Lineker wrote: “Hope this is not as serious an injury to Harvey Elliott as it appears.

“Didn’t look a bad challenge or a red card in normal speed, but without replays it’s hard to be sure. Just a freak accident, I reckon.”

Salah scored the 20th-minute opener and Fabinho added a 50th-minute second before Sadio Mane struck two minutes into the eight allocated as added time as a result of Elliott’s treatment and departure.