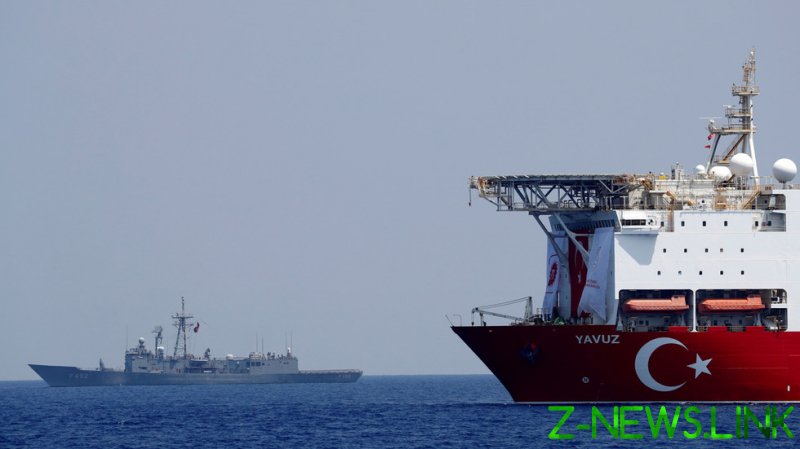 The EU has made it clear it fully supports its member states Greece and Cyprus in the dispute with Turkey. Officials in Brussels have warned they are drawing up potential sanctions if dialogue does not begin, amid a standoff over maritime areas thought to be rich in natural gas. Cavusoglu again said his country was open to talks without pre-conditions.

“France, Greece, and the Greek Cypriots want sanctions. The bloc may make a decision on September 24-25 to impose sanctions, which I do not expect, but could also take place. Similar things have happened in the past,” Cavusoglu said in an interview on NTV Turkey.

He also said that Turkey’s seismic exploration vessel operating in the Eastern Mediterranean had returned home to replenish supplies and for maintenance. However, the minister added that the return of the Oruc Reis survey ship did not mean a change in Turkey’s exploration policy in the region. Two other drillships are continuing to carry out their mission in the area.

The seven EU members with Mediterranean coastlines gathered for a summit in Corsica, France, last week to discuss the issue. They reiterated their “full support and solidarity with Cyprus and Greece in the face of the repeated infringements on their sovereignty…as well as confrontational actions by Turkey.” They warned that “in the absence of progress in engaging Turkey into a dialogue, and unless it ends its unilateral activities, the EU is ready to develop a list of further restrictive measures.”

Turkey also said on Monday that the United States needed to return to a neutral stance on Cyprus. The statement came after Washington and Nicosia signed a memorandum of understanding to create a training center on border security.

Secretary of State Mike Pompeo said earlier this month that the US would lift a 33-year arms embargo on Cyprus and deepen its security cooperation with Nicosia. On Saturday, he visited the island and said that Washington remained “deeply concerned” about Turkey’s actions in the Eastern Mediterranean.

“The memorandum of understanding will not serve peace and stability in the Eastern Mediterranean, and will damage the solution of the Cyprus problem,” Turkey’s Foreign Ministry said.

The island was split in a Turkish invasion in 1974 triggered by a brief Greek-inspired coup. The internationally recognized Greek Cypriot government represents the whole of Cyprus in the EU. North Cyprus is a Turkish Cypriot state recognized only by Ankara.