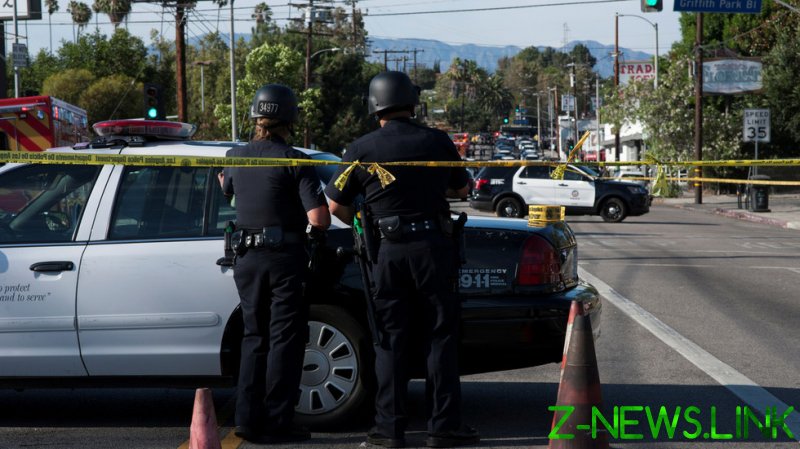 Two Los Angeles County Sheriff’s Department deputies were shot in their car near a metro station in the city of Compton on Saturday, the department wrote on its official Twitter account. It shared footage of the attack that shows a gunman walk past their vehicle, raise a weapon and open fire on both deputies.

The suspect is seen running away safely as one of the wounded tries to open the passenger door, at which point the video ends.

The chilling footage was shared by many on social media, including President Trump. “Animals that must be hit hard!” he wrote shortly after the incident.

Gravely injured, the deputies managed to radio for help and were rushed to hospital in critical condition, Sheriff Alex Villanueva told the media. The pair, a 31-year-old woman and her 24-year-old male partner, underwent surgery and emergency treatment for multiple gunshot wounds.

“They are both still fighting for their lives, so please keep them in your thoughts and prayers,” the department added. Sheriff Villanueva said the attack was “a cowardly act” that seems to be “part of a trend, a growing trend when suspects open fire unprovoked.” Almost every week police officers die “in the line of duty,” he said.

The sheriff’s department also reported that protesters swarmed the entrance and exit of the hospital’s emergency room, chanting, “we hope they die!”

Meanwhile, the department dispatched at least 14 homicide detectives to the scene to investigate the ambush, along with forensic teams and a K-9 unit. The adjacent streets were sealed off and the manhunt for the suspect continues.

The attack comes weeks after an intense shootout in Rancho Cordova, California. A gun-wielding man attacked two deputies and shot one of them in the lower body. The skirmish continued until the suspect was shot twice by deputies and died.