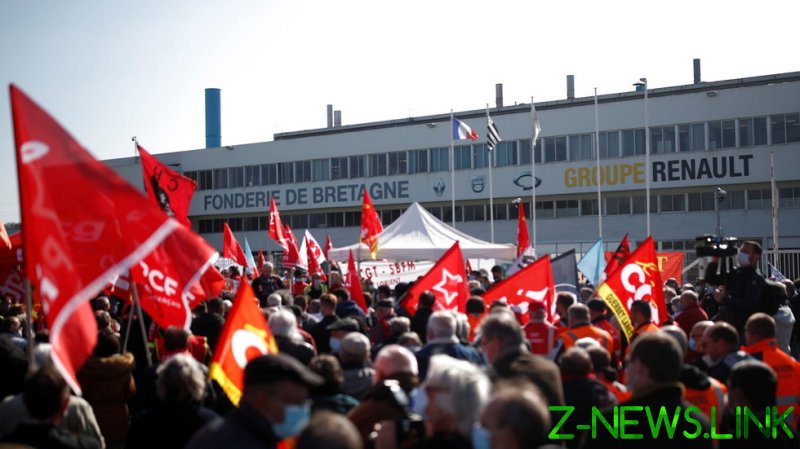 Around 350 employees picketing Renault’s Fonderie de Bretagne factory in Brittany held seven managers “hostage” on Tuesday as they prevented them from leaving work. The incident comes after the automaker announced plans to sell or close the facility.

Following several attempts to convince the workers to release their “hostages,” the executives were let out around 22:30 local time, though the blockade of the factory continued into Wednesday.

The car manufacturer rebuked the workers in a brief statement while also calling for “dialogue and calm.”

Renault Group strongly condemns these actions and calls for the lifting of the blockade and an immediate return to calm.

Renault tried to appease the disgruntled employees, saying it was searching for a buyer who would “maintain the site’s activities” and ensure the workers keep their jobs.

However, that did little for the workers at the General Confederation of Labor (CGT), a trade union, who insisted the company did not want to negotiate, despite its pleas to the contrary.

“They still didn’t want to have a dialogue so it was pointless trying to talk to people who don’t want to engage,” CGT representative Mael Le Goff told AFP, explaining why the workers eventually released the captive executives.

“It does not smell good for us; no discussion is possible with the management,” Le Goff told a local news outlet, adding that the trade union had “heard very alarming comments” about potential job cuts and layoffs at the site.

We would like to ask them what will become of us, if we are sold, if we are made redundant… We have been waiting for a year… We no longer have much hope.

The trade union is currently planning a protest in the town of Hennebont in Brittany on May 1 and a meeting with the President of the Regional Council of Brittany, Loig Chesnais-Girard.

The Tuesday incident is not the country’s first case of “bossnapping.” Back in 2014, workers at a Goodyear tire factory in northern France detained two executives for more than 12 days in an attempt to prevent the facility’s closure. The practice was apparently so common during the tenure of ex-President Nicolas Sarkozy that he threatened to grant police extra powers to stop it by force.