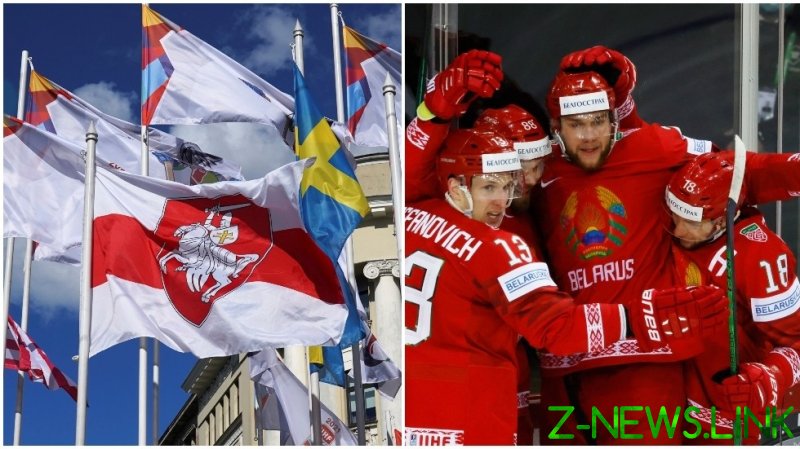 On Monday, Riga mayor Martins Stakis and Latvian Foreign Minister Edgars Rinkevics publicly removed the Belarusian flag at a display representing the 16 nations taking part in the ongoing World Championship in the city.

In a message on Twitter, Stakis said the flag had been replaced with a red and white one associated with the Belarusian opposition movement.

The step was designed to show Latvia’s outrage at alleged “state terrorism” after a Ryanair flight carrying wanted Belarusian opposition activist Roman Protasevich from Greece to Lithuania was diverted to Minsk on Sunday due to a purported bomb scare, with Protasevich then being detained.

However, the IIHF has taken a dim view of the Latvian officials’ grandstanding, issuing a statement reminding them of their responsibilities as hosts of the tournament.

“The IIHF does not agree with the actions taken yesterday by the Mayor of Riga and the Latvian Foreign Minister to use the flag of a participating country in the 2021 IIHF Ice Hockey World Championship for a political message,” read a statement on Tuesday.

“The actions of the Belarus government are separate from the players who are competing under the Belarus flag at this tournament.

“The players have been welcomed to Latvia as guests and should not have to see their flag removed without their consent from the public display of the 16 participating countries.

“This is in direct contradiction to the host country slogan ‘Passion. No Borders.’

“Therefore, the IIHF has asked the Mayor of Riga to urgently take down the IIHF flag from the same area, as well as the World Championship flag which bears the IIHF name.

“In accordance with the IIHF Statutes, we are an apolitical sports organization, and are demanding that the IIHF is removed from any association with the political statements the Mayor and Foreign Minister have made by changing the flag of our Member.

“The IIHF will retain the Belarus flag in all World Championship venues for the duration of the tournament, and hopes that the mayor’s office of Riga will reconsider its decision to remove the Belarus flag from the group of participating nations being displayed in Riga.”

Responding to the demands from the IIHF, Riga mayor Stakis claimed they were being forced to pick sides against “a dictator”, presumably referring to Belarusian President Alexander Lukashenko.

In comments to the Russian media, IIHF chief Rene Fasel was quoted as suggesting that Stakis was using the situation to further his own political purposes, adding that he was uncomfortable with the IIHF being used “as a stage for a politician.”

Latvia was originally due to co-host this year’s World Championship with Belarus, before the IIHF stripped Minsk of that right citing “safety and security concerns.”

The IIHF had faced the threat of major sponsors withdrawing in protest at the actions of Belarusian leader Lukashenko, who stands accused of rigging last year’s elections and overseeing a brutal crackdown on opposition in the country.

After the detention of Protasevich, all 27 European Union leaders called for a ban on Belarus-based airlines landing in the bloc, while EU-based carriers have been warned to avoid the country’s airspace.

Critics of the West, however, have said that condemnation was in short supply back in 2013 when the US and its allies attempted to snatch American whistleblower Edward Snowden by forcing a plane they presumed he was flying on to land in Austria.

Snowden had in fact remained at an airport in Moscow, and is still in Russia to this day after being granted asylum.