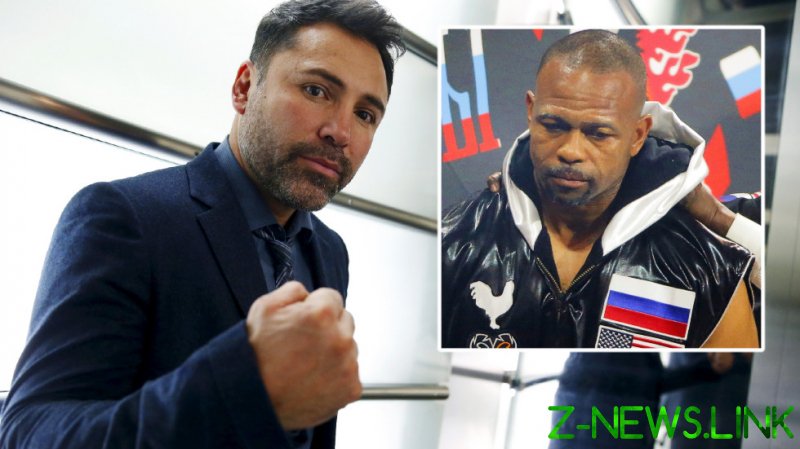 Former six-division champ De La Hoya revealed this week that he is to make his return to the sport in July for the first time since a 2008 shellacking at the hands of Manny Pacquiao, and Jones – fresh from his own ring comeback last November in a veteran matchup against Mike Tyson – has thrown his hat into the ring to be the man to challenge him.

Jones, a boxing legend in his own right, fought Tyson to an eight-round draw last November in a bout which proved to be a massive success for all involved, with some estimates placing the pay-view-view proceeds somewhere north of $80 million – a figure which is even more impressive given that there was no live gate due to Covid-19 restrictions.

And if it seems as if this has helped provide some motivation for De La Hoya’s own return, Jones’ trainer says that his man will be happy to meet him in the center of the ring on July 3.

News of the potential fight wasn’t greeted with the waves of enthusiasm Smith might have expected, however.

“Why can’t these [Hall of Fame] guys just stay retired?” asked one boxing fan on social media, while another described the idea as a “circus act”. “Just isn’t really that interesting watching 50-odd-year-old guys fighting.”

“Hell no,” wrote another. “Roy Jones needs to know when to STOP. He disappointed the fans against Tyson last time. We don’t want to see his old ass in the ring ever again.”

Jones had been linked to a fight with former UFC champion Anderson Silva but ‘The Spider’ has since agreed terms to box another former ring icon, Julio Cesar Chavez Jr, in June, leaving Jones with an opening in his calendar – one that Smith thinks De La Hoya could more than adequately fill.

“The fans all over the world love Roy Jones Jr and Oscar De La Hoya,” Smith continued. “This is a great fight, an exciting match-up where you would only dream it up in a video game. Now we have a chance to make it a reality.

“Roy is still active and training every day, he’s in tremendous shape and his speed is still crisp.”

One sticking point, however, could be the weight that any prospective fight might take place at.

Jones tipped the scales at a career-high 210lbs for his November showdown with Mike Tyson and while De La Hoya is clearly no longer in the fighting shape he was in his prime, his latter career saw him compete at the middleweight limit of 160lbs.

Still, though, in days of yore it was often said that ‘styles make fights’. But in this brave new world of boxing in 2021 it appears that the maxim should be modified somewhat.