Home / WORLD / ‘And so it begins’: Mixed reaction as vaccine passport plans ‘set to begin with England Euro 2020 games at Wembley this weekend’

‘And so it begins’: Mixed reaction as vaccine passport plans ‘set to begin with England Euro 2020 games at Wembley this weekend’ 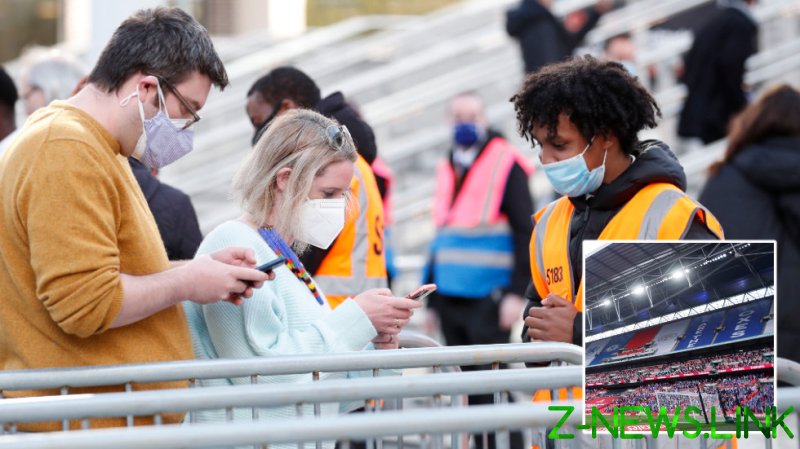 At least 22,500 football fans are hoping to attend England’s group stage matches this month against Croatia, Scotland and the Czech Republic, with those allowed in filling up to 25 percent of the national stadium capacity.

Supporters attending the Three Lions’ initial matches and potential knockout fixtures in the postponed competition must show on a National Health Service app that they have received two Covid jabs at least 14 days prior to matchdays or taken a negative test within the past 48 hours, according to The Times.

In contrast, the 12,000 fans who are expected to attend Euro 2020 games at Hampden Park in Scotland are not being asked for proof of vaccination or negative test results – but are being told to maintain at least 1.5 meters in social distancing instead of the usual one meter.

Should the vaccine passport system operate smoothly, it could be repeated for larger audiences at the competition’s semifinals and final, which are also set to be contested at the iconic stadium.

Premier League bosses are also said to be mulling over a scheme demand for the upcoming season, which it says will allow stadiums  to target full capacity if it is given the green light by prime minister Boris Johnson’s Conservative government.

“All ticket holders aged 11 and older must present evidence that they are at a low risk of transmitting Covid-19 to enter Wembley Stadium,” the conditions are said to read, warning that failure to do so will result in being outlawed from attending.

Other tests, such as those provided by private companies, will also reportedly not be accepted.

Fans at both Wembley and Hampden will be required to wear masks and will be allocated a special 30-minute entry slot over the three hours leading up to kick-off to reduce bottlenecks.

Fans must also remain seated at half-time, refrain from hugs and dishing out high-fives and maintain distance when celebrating.

In politically-sensitive times, the potential moves have met a mixed reaction – with some echoing the reception given to the idea of Premier League vaccine passport plans, which some fear will create a “two-tier society” with “second-class citizens” who have not been vaccinated.

“And so it begins,” wrote one fan online. “If you have to prove vaccination or [a] negative test, then why restrict the capacity to 25,000?”

“Give an inch and they’ll take as much as they’ll get,” said another, while a human rights account called the concept “discrimination” and “illegal”.

But others saw the news as positive.

“Big thanks to England fans going through these trials for fans in the group stages,” joked a Wales supporters’ group.

“Ready for The Red Wall to take over Wembley later in the tournament.”

“Good step to getting crowds back watching sport and in theatres,” said a supporter.

“It will take five seconds to show your vaccine status on your phone. It’s barely an inconvenience.”

One reader said the proposal seemed “like an awful lot of effort just to boo your own team”, referring to the uneasy reaction the England team received when they collectively took to their knees in support  of Black Lives Matter at the Riverside Stadium against Romania on Sunday.

Meanwhile, a new Kick It Out and Football Supporters’ Association campaign has urged fans at Wembley to “drown out the boos” if they again emerge against Croatia on Sunday.

Campaign options being mulled include asking supporters to chant either “kick it out” or “England, England” when the referee customarily blows his whistle and players bend down to take the knee, according to Sky Sports.