Home / economy / Anatomy of a rumor: elections without politicians, the economy without money 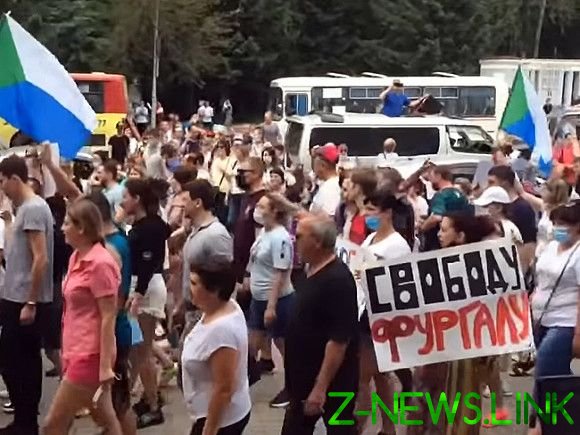 The Kremlin can not repay Khabarovsk protests, fears of a fall vote, and by all means delays the new collapse of the ruble.

News from Khabarovsk looking for the plug

The latest polls of all the major sociological companies that can at least nominally trust, demonstrate that the growth of interest of Russians to the events in Khabarovsk Krai is steadily growing. According to FOM, from the beginning of July interest in ongoing popular protests against the arrest of the former Governor Sergey Furgala has grown so much that the head of the topic it has become for 20% of respondents. “Levada-Center” reports that the developments in Khabarovsk “closely watched” by 26%, and aware of the situation there and all over 80%. Russians.

Given the information policy of state mass media who pretend that nothing unusual in Khabarovsk is not happening, it is clear that most of these people get their information not from traditional media such as TV or, say, Newspapers that in Russia for a long time almost no one reads, and from the Internet.

With this, most likely, associated with the rumors that the authorities are looking for performers for a large information ordering — the change agenda in the Runet. To push taking place in Khabarovsk on the back burner. Here all means are good. This may be a “Bandera Sabbath” to “brotherly Belarus”, which the officials responsible for Russian internal politics, the reality is clearly much less concerned than the far East. Or, for example, rumors about the second wave of coronavirus and the preparation for it that flooded the Internet in early August.

By the way, the story with rumors about a “second wave” COVID-19 suggests that orders for the “change agenda” in Runet already distributed, and at the end of July and now just started active work. If so, it turns out that power again, do not plan strategically and to solve only short-term tasks. It is clearly not taken into account that the horror stories about the second wave of the epidemic may frighten many Russians, and to cause unrest in the minds, and, in theory, considerably more than the excitement in the Khabarovsk territory.

Meanwhile, a growing number are watching the Far East in Russia testifies to another important trend that the government in their short-term political games, it seems, once again underestimated. It is about the transformation of an increasing number of people from TV viewers to Internet users. Of course, this may be a temporary phenomenon or a trend that applies the search data for only one subject. But it is possible that many of those who changed their main source of information, to the “blue screen” will not return.

This means that while the authorities solve the problem of “changing the agenda”, Khabarovsk protests at the same time change the whole structure of the information consumption of Russian companies. That will inevitably have far-reaching consequences.

A single day without a vote

Regional and local elections of 2020 will be held without the participation of the opposition. As they say, the Kremlin gave the command not to register no, even provisionally opposition candidates. In the stop-list are many members of the Communist party, although in the past the party was considered a great sparring partner. Apparently, now in this role, successfully taking advantage of the Khabarovsk precedent, nominated by the liberal democratic party. Although it remains, of course, the question is not whether its candidates in the event of an unexpected victory in the vote “for anyone other than a representative of “United Russia”” to play by the rules, as did Sergey Furgal.

In the Chelyabinsk area the list of party “the Apple” rejected “on signatures”, among which 22% were declared invalid. In Leningrad region the refusal to register was received by the candidate from the Communist party Vadim Grishkov, not gain, according to the official version, the required number of signatures of municipal deputies. The same cause of failure of the candidate from the Communist party and the Komi Republic. The electoral Commission has registered on Thursday four of the five nominated for the elections of the head of region candidates, by refusing the registration to the Deputy of the state Council of the Komi Republic, Oleg Mikhailov (CPRF), which has 16 signatures of municipal deputies is recognized invalid.

Even more interesting in the Irkutsk region, where on the day of registration of participation in elections have refused the candidate of the Communist party, which, incidentally, was the previous Governor of the region. Well, the most revealing story, of course, in the Arkhangelsk region, where the head of the public movement “Russian North” Oleg Mandrykin, Yabloko and supported by the public coalition “Stop Lies”, not passed, according to the authorities, the municipal filter to participate in the gubernatorial election.

As has counted up the head of the Central election Commission, Ella Pamfilova, on the election of heads of regions extended across Russia 147 candidates, 73 of them are registered 37 candidates denied registration, 10 have shot themselves. For the rest of the decision will be made prior to 9 August. Pamfilova said that the main reason for refusal to register — lack of necessary documents. And this is true, but only for those who already were not going to run. Those who tried to break through the Kremlin filters “cut” with the “wrong” signatures.

It turns out that as such serious elections in the regions on 13 September are expected. Opposition to them is practically no, and not only on the Governor, but even at the municipal level. The only possibility is the repetition of the Khabarovsk precedent with the election of a Furgala. But, as rumor has it, in order to avoid this, in the affected regions are already working spin doctors sent by the presidential administration. Moreover, this activity is conducted without taking into account the views of local authorities, as the invitation of these “experts”, as they say, was a prerequisite for local officials wishing to extend their authority.

Capital flees from the “EN zone”

Funneling money out of Russia, the whole of the year 2020, but, as reported, in August this process accelerated markedly. Along with the rising price of gold started and the outflow of capital from funds that deal with investing in the Russian economy, which is not quite a common trend for so-called “risky markets”.

In Russia itself there are persistent rumors about the imminent collapse of the ruble on the background of the deepening large-scale economic recession, which began in the spring in connection with coronariana. National currency and gradually sags, but an escape from the “EN zone,” spurring rumors about the complete artificiality of the present situation. Alleged authorities were postponing the beginning of the crisis, without interference to hold a plebiscite on the Constitution and has now decided, if possible, to hold out a little longer — up to a Single day of voting.

Well, by the end of September the economy according to the pessimistic forecasts will start to crumble. Therefore, the capital and fleeing the country. Psychological factors in relation to Russia, it seems, become much more important than so-called “objective economic”.