Home / WORLD / ‘An internal issue’: Russia’s shown ‘much more restraint’ in its response to events in Belarus than Europe & US, says Putin

‘An internal issue’: Russia’s shown ‘much more restraint’ in its response to events in Belarus than Europe & US, says Putin 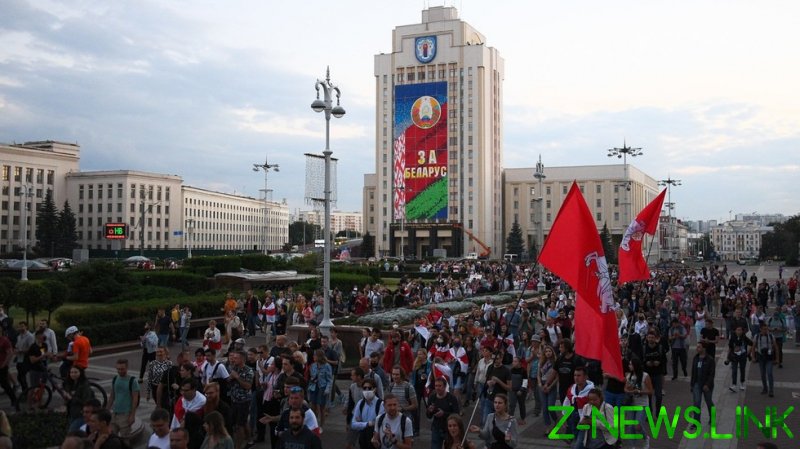 “We believe this is, first and foremost, an internal matter of the Belarusian society and the people of Belarus,” Putin told the Russia-1 TV channel in an interview aired on Saturday, in which he spoke about mass protests in Belarus that have rumbled on for weeks after a landslide victory for incumbent Alexander Lukashenko. The outcome of the August 9 presidential elections has prompted accusations of electoral fraud from the opposition.

After the protests broke out, some European leaders called on Moscow not to interfere in Belarus amid media speculation that Russia would be sending or has already dispatched military to the country. Both Minsk and the Kremlin have rubbished the claims.

On the other hand, the EU, which, unlike Moscow, refused to recognize the election, has agreed this week to slap sanctions on about 20 Belarusian officials whom it deems responsible for the post-election crackdown. Poland and the Czech Republic went a step further and called for a new election to be held.

Likewise, the US has already signaled its support for the face of Belarusian opposition, Svetlana Tikhanovskaya. On Monday, the exiled former presidential candidate met with US Deputy Secretary of State Stephen Biegun to discuss “strengthening democracy and human rights in the country” in Vilnius, Lithuania.

“We are acting in a much more restrained and unbiased way than many other nations in Europe and America, including the US, as far as the events in Belarus are concerned,” Putin said, adding that Russia still keeps close tabs on Belarus, since it is “probably the closest country to Russia ethnically, culturally and spiritually.”

Russia and Belarus have been part of a group called the Collective Security Treaty Organization (CSTO), a collection of six former Soviet countries that pledged to provide “necessary assistance, including military” to each other “in case of an act of aggression.” Putin clarified, however, that Lukashenko has asked him to have a group of law enforcement officers on standby rather than military if the situation escalates into unbridled violence.

The group has been formed, the Russian leader confirmed, saying Moscow expects the crisis to be resolved “peacefully,” and all those who violated the law, be they police officers or protesters, will be brought to justice.

Outlining the circumstances that may call for Russia’s assistance, Putin said that Moscow would not involve itself in Belarus unless “extremist elements acting under the cover of political slogans cross certain red lines and engage in banditry, start burning houses and banks, try storming government buildings.”