Home / WORLD / ‘An INCREDIBLE error’: Watch the CALAMITOUS mistake that saw Barcelona crash to defeat at home to Cadiz

‘An INCREDIBLE error’: Watch the CALAMITOUS mistake that saw Barcelona crash to defeat at home to Cadiz 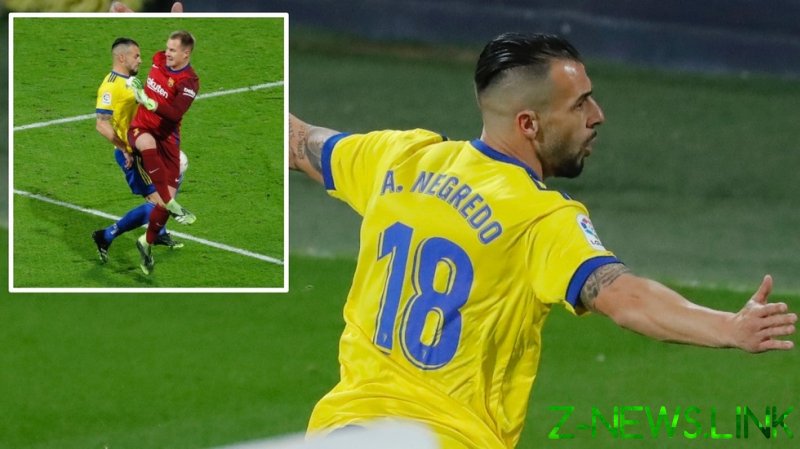 Barcelona looked lacking in pace, urgency and determination as they fell to defeat at the Camp Nou, with the winning goal a calamity of errors as Barca keeper Marc-Andre ter Stegen kicking a clearance off Cadiz striker Alvaro Negrodo, who rolled the ball into the empty net to seal the defeat.

After the match, Koeman couldn’t hide his rage, saying, “We lost because of an incredible error, that is not the level I expect from my team,” he told TV3.

“It shows we were not concentrating. The attitude was not good tonight. I’m very disappointed and we have to improve.”

The result was Barca’s fourth defeat in 10 league games, and shows that the Dutch boss has much work to do to turn around a club still in turmoil after a nightmare end to the season, with the team struggling to establish defensive stability as they look to claw back ground on the pacesetters in the Spanish top flight.

“It’s very difficult to explain the goals we are conceding lately. It could be down to a lack of concentration,” Koeman said.

“When we equalized we had half an hour left to score again but then we conceded a goal that we cannot afford to concede, from a throw-in. We also lacked aggression when we didn’t have the ball today.

“We had highs and lows during the game and also in our attitude.”

Barca’s form is a stark contrast to their performance last season, despite their failure to win the La Liga title.

Last season they only missed out on the title on the penultimate day. But now they face the very real threat of being eliminated from the title picture with more than half of the season still to go.

With Barcelona now sitting seventh in La Liga, with just 14 points from 10 games played, 12 points behind league leaders Atletico and six points adrift of longtime rivals Real Madrid, Koeman admitted that his side’s latest defeat is another significant blow to their hopes of challenging for the crown this season.

“It’s a gigantic step back for our chances of fighting for the title,” he said.

“We have to see it like that after getting such a disappointing result today. Twelve points is a very big distance but we have to keep going.”