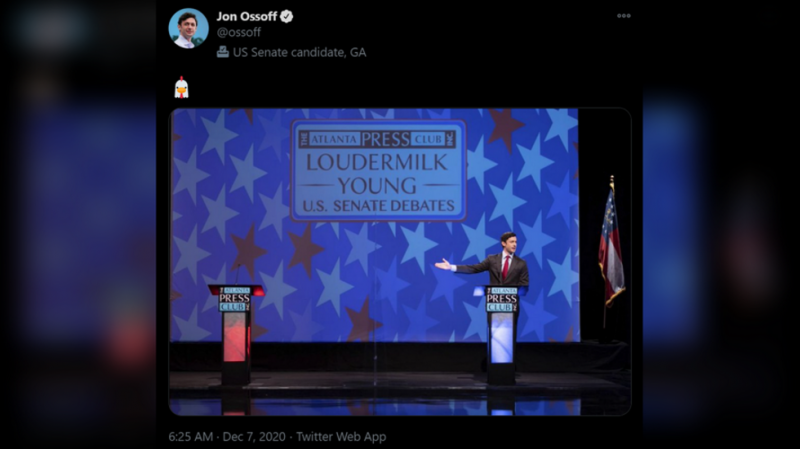 In a scene befitting the strange political and social landscape of 2020, Ossoff debated an empty podium on Sunday night in what was supposed to be the first of two debates before a January 5 runoff election that will decide who will represent the Peach State in the Senate.

Perdue announced last month that he would not attend the debate, hosted by the Atlanta Press Club, but the event went ahead anyway.

The moderator for the verbal fisticuffs noted that Perdue “declined to participate in this debate and is represented by an empty podium.”

The event took on a surreal quality, with Ossoff being invited to ask a question that he would have put to Perdue, and then answer on his behalf. The Democrat used the occasion to rip into the Republican incumbent, accusing Perdue of being too “weak and afraid” to debate him.

Ossoff also argued that Perdue’s decision to skip the event revealed an “astonishing arrogance and sense of entitlement,” and even suggested that the senator declined to attend because he was afraid of “incriminating” himself.

The Democratic challenger has repeatedly pointed to allegations that Perdue made lucrative trades based on insider information that he obtained as a lawmaker, but his campaign insists that the senator has already been cleared of all wrongdoing.

Perdue’s absence seemed to irk many on social media, who seemed to agree with Ossoff’s criticisms.

“How can Georgians trust that their senator will fight for them in Washington if he won’t even show up to a debate to defend himself?” asked one peeved Twitter user.

Many others hurled verbal disapproval at the Republican lawmaker, with one person joking that the empty podium was actually an improvement over Perdue.

But others argued that Ossoff had no right to lecture his Republican opponent.

Perdue’s campaign also issued a statement about the event, insisting that Ossoff had “lost a debate against himself.” The senator said that Ossoff’s support for harsher Covid-19 measures and a blanket amnesty policy showed the Democrat was “unserious” and “unprepared” to serve in the US Senate.

Both of Georgia’s Senate seats are up for grabs. If the Democrats manage to win both runoff elections, the 50-50 split in the Senate would give the tie-break vote to presumed vice president-elect Kamala Harris, in effect placing the body under Democratic control.