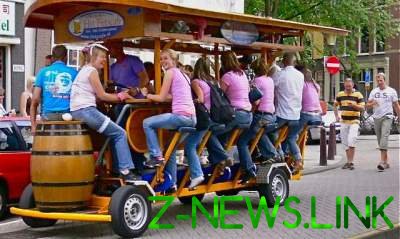 Residents of the city opposed such entertainment.

One of the favorite pastimes of tourists in Amsterdam – tour of the city on the “beer bike” in the company of friends and alcohol was banned. The city authorities decided to abandon this mode of transport in Central districts of the capital of the Netherlands, as it interfered with local residents, ordinary cyclists and strolling tourists.

Beer bike is a pub on wheels that is propelled by the passengers, torque bike pedals. It’s a long cart hoisted on her Desk, which was on the bike seats sit the tourists down the road drinking beer and looking at the surroundings. Designed a bike for ten or more people.

Citizens have repeatedly complained about the noise made by the “beer bike”, or rather, their drunk passengers. Such vehicles like to choose for noisy gatherings such as bachelor parties. In addition, the “beer bikes” clumsy and create problems on the roads.

The ban on providing “beer bikes” in the lease took effect from 1 November, reports the BBC. In Amsterdam, this business was involved in four companies that tried to challenge the government’s decision in court, but unsuccessfully.