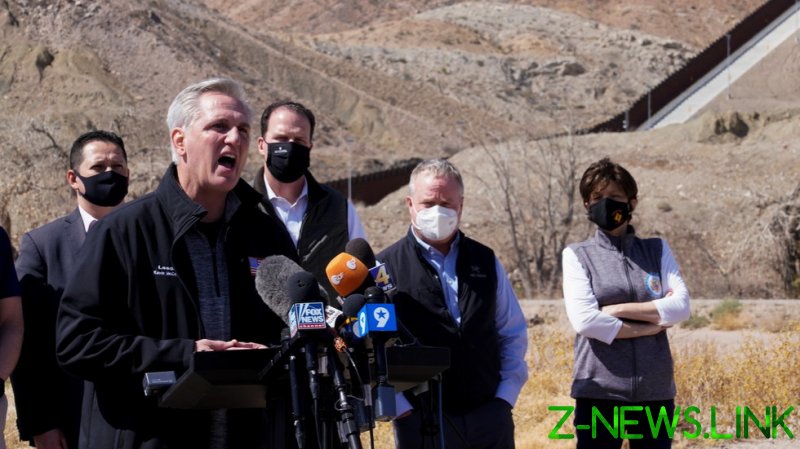 As Democrats prepare to introduce an ambitious immigration reform bill on behalf of President Joe Biden, which would offer a pathway to citizenship for 11 million illegal immigrants living in the US, a crisis is unfolding at the country’s border with Mexico. Illegal crossings this year are set to surpass 2018, 2019, and 2020 combined in some sectors of the 2,000-mile frontier, and a record-breaking 4,200 minors are being detained in temporary facilities, with these “jail-like” shelters holding 3,000 of these children longer than the 72 hours permitted by law.

Biden himself has said little about the situation, and his officials, including Press Secretary Jen Psaki, have refused to acknowledge it as a “crisis.” The Federal Emergency Management Agency (FEMA) was tasked on Saturday with processing the influx of immigrants, but no concrete plans to deter further crossings have been unveiled.

Piling pressure on Biden was House Minority Leader Kevin McCarthy (R-California) and a delegation of Republican lawmakers, who toured the border at El Paso, Texas, on Monday. In addition to the surge of Mexican and Central American immigrants, McCarthy told reporters that people from Yemen, Iran and Turkey are attempting to cross into the US illegally.

“People on the terrorist watch list” are being caught by Customs and Border Patrol agents, McCarthy claimed, citing agents he spoke to at a crossing point popular with migrants and smugglers.

Other members of McCarthy’s delegation – Reps Mariannette Miller-Meeks (Iowa) and John Katko (New York) – also mentioned the alleged terror suspects crossing the border, but did not provide any further information.

Back in 2019, the Department of Homeland Security stated that an average of “10 individuals on the terrorist watchlist per day” were stopped trying to enter the US. However, the DHS admitted that most enter through airports, and a department whistleblower claimed last year that only three suspected terrorists were apprehended at the border during his time at the DHS.

Separate from suspected terrorists, however, are so-called “special interest aliens,” individuals who are not on the terrorist watchlist but whose travel patterns indicate that they “may pose a national security risk.” In the same 2019 statement mentioned previously, the DHS said that these people are often “confused publicly,” including by the Trump administration itself.

That McCarthy would use every possible method of attack on Biden is no surprise. In addition to talking up the terrorism threat, the Republican chief accused Biden of presiding over an increase in drug smuggling, people trafficking, and the “human heartbreak” of unaccompanied children washing up in detention centers.

“This crisis is created by the presidential policies of this new administration,” he said. “There’s no other way to claim it, than a Biden border crisis.”

Democrats have blamed Donald Trump for the spiraling situation at the border, though some, like border czar Roberta Jacobson, are beginning to admit that Biden’s own pro-immigration messaging during his presidential campaign may have fueled the rise in crossings. Conservatives have also blamed Biden’s deportation moratorium, reactivation of Barack Obama’s ‘catch and release’ program, and suspension of Trump’s ‘Remain in Mexico’ policy, as responsible for the migration surge.