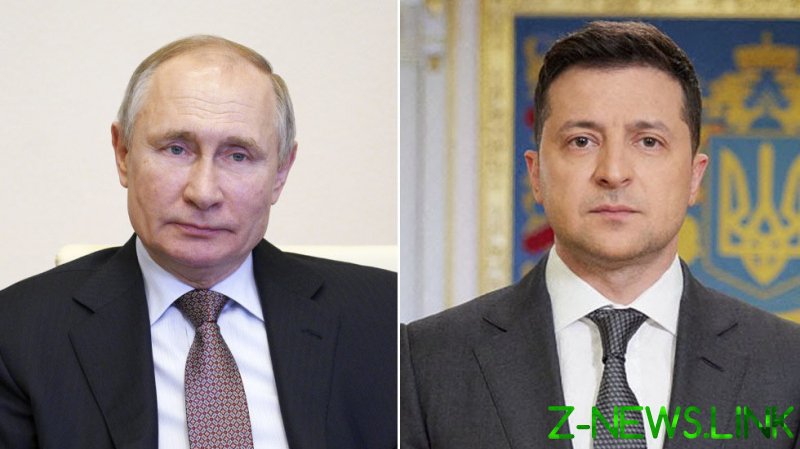 Speaking before talks with Belarusian President Alexander Lukashenko on Thursday, Putin said Zelensky should first discuss the problems of Donbass with the heads of the self-proclaimed Donetsk and Lugansk People’s Republics before speaking with representatives of third countries. He included Russia in this category.

“And if we are talking about the development of bilateral relations, then, please, we will receive the president of Ukraine in Moscow at any time convenient for him,” Putin said. “If President Zelensky wants to start restoring relations, Russia will only welcome it.”

The Russian leader’s statement comes after Zelensky suggested a summit “anywhere in the Ukrainian Donbass where the war is going on,” earlier this week.

“Ukraine and Russia, despite their shared past, look to the future in different ways. We are us. You are you,” Zelensky said. “But this is not necessarily a problem; it is an opportunity. At the very least, an opportunity, before it is too late, to stop the murderous mathematics of future war losses.”

The conflict in Donbass started in April 2014, when two pro-Moscow breakaway republics unilaterally declared independence from Kiev. These regions – the self-declared Donetsk (DNR) and Lugansk People’s Republics (LNR) – are unrecognized by both Russia and Ukraine. However, according to Kiev, they are under the control of the Kremlin, a charge Moscow denies.

Following Zelensky’s invite to Putin, the heads of both the DNR and LNR invited the Ukrainian leader to meet and hold talks in Donbass, suggesting he deals directly with them instead.

“I urge you, Mr. Zelensky, not to invite the leaders of third countries to the line of contact, but rather to go there yourself for an honest and open conversation with us,” said Denis Pushilin, the leader in Donetsk.

The situation in Donbass has escalated in recent weeks, although it now seems to be calming down. Media reports from the region revealed a build-up of both Russian manpower and equipment near the border, following news that the Ukrainian Army was increasing its number of forces in the area. However, on Thursday, Russian Defense Minister Sergey Shoigu announced that troops deployed near the frontier would soon begin returning to base, as military exercises had concluded.