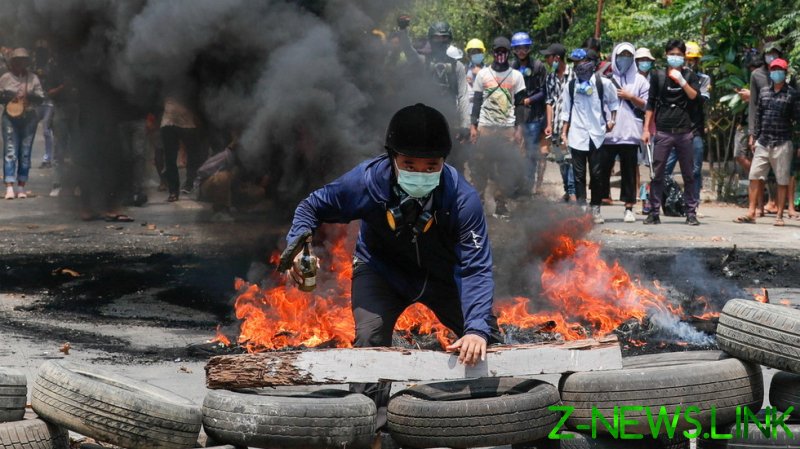 After at least 90 people were reportedly killed on Saturday – as the military celebrated its annual Armed Forces Day – the leader of the Restoration Council of Shan State (RCSS) Yawd Serk said, “(It) isn’t an armed forces day, it’s more like the day they killed people.”

“The ethnic armed groups now have a similar enemy and we need to join hands and hurt those that are hurting the people. We need to join together,” Serk told Reuters.

The RCSS, which operates near the border with Thailand, joined a growing list of Ethnic Armed Organizations (EAO) who have condemned the February 1 coup and pledged to stand with protesters. It had previously stated that it would shelter and support victims fleeing from the violence.

Some two dozen EAOs control various regions of the country although 10 are currently signatories to a Nationwide Ceasefire Agreement. Their involvement would further stretch already thinning security force resources.

Already, a parallel government – the Committee Representing Pyidaungsu Hluttaw (CRPH) – has been set up in EAO-controlled areas. The CRPH, composed of elected officials from the ousted National League for Democracy-led (NLD) government, has reportedly begun talks with a number of EAOs.

Earlier this week, the Arakan Army (AA) – a major EAO in the Rohingya-dominated western Rakhine State which has been fighting against armed forces since 2018 – announced its support for the protest movement.

Denouncing Myanmar’s military’s tactics as “cruel and unacceptable,” AA spokesman Khine Thu Kha said on Tuesday, “It is a great sadness that innocent people are being shot and killed all over Myanmar.” He added that AA was “together…with the people.”

These voices of support have come amidst growing calls from protesters for the formation of a multi-ethnic ‘federal army’ to protect civilians from security forces – something Serk said he was in favor of.

Despite a nationwide clampdown on mobile internet, social media sites are buzzing with messages urging for the formation of an armed force, although how and where they will find support and resources remains unknown.

Flyers calling for a ‘federal army’ have been spotted at protests and there are widely-circulated posts of a shield crest for the proposed army, with 14 stars to represent the country’s states and regions and seven red lines that supposedly symbolize the principles of political impartiality, ethics and service to an elected government.

Noting that “59 years of Fascist-like occupation” was enough, Maung Zarna, a co-ordinator with the Free Rohingya Coalition, tweeted that he would take up arms since “fascists understand only murder, war and violence” and that the Myanmar generals were “no exception.”

In a broadcast on state television, Senior General Min Aung Hlaing said, “The army seeks to join hands with the entire nation to safeguard democracy. Violent acts that affect stability and security in order to make demands are inappropriate.”

The general also reiterated the military’s promise to hold elections, but did not provide a timeframe.